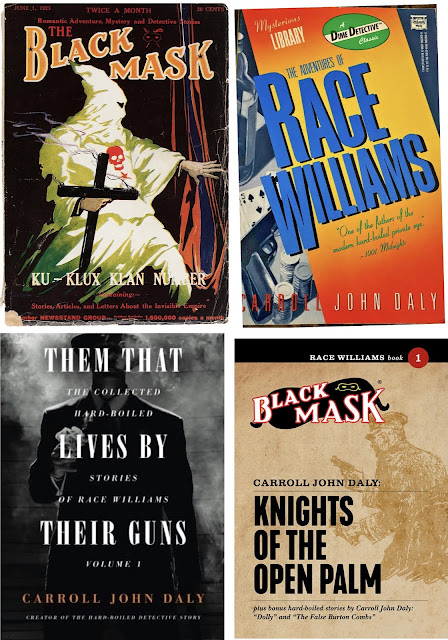 Carroll John Daly (1889-1958) invented the hardboiled detective genre in Black Mask Magazine with his May 1923 story “Three Gun Terry.” He followed it up the next month with “Knights of the Open Palm,” launching the Race Williams series of stories and novels that continued for over 20 years. The character later inspired the creation of Mickey Spillane’s Mike Hammer and thousands of other imitators.

As the debut story opens, narrator Race Williams explains that he’s a private investigator who splits the difference between cops and crooks. A client named Thompson comes to Race’s office seeking to engage him to rescue his kidnapped 17 year-old son from the Ku Klux Klan. The kid may have information about a recent Klan murder which prompted the alleged abduction. The KKK must have been rather powerful in 1923 because Thompson is surprised that Race accepts the assignment to defy the Klan and rescue the boy.

After an informant in a tavern teaches Race the secret handshake as well as Klan buzzwords, Race decides that the best way to find the missing kid is to infiltrate the fraternal order in full regalia. So, it’s off to the small farming town of Clinton, a rural hamlet firmly in the grip of the shadowy, hooded menace. It doesn’t take long at all for things to come to a series of confrontations between Race and the local KKK muscle.

For a story written nearly 100 years-ago, Daly’s writing is still pretty fresh. Race’s hardboiled and colloquial patois must have been groundbreaking at the time and recalls the bragging tough-guy patter later imitated by Mike Hammer, Shell Scott and many others. Race is a fantastic character - funny, fearless and confident. There were scenes where I found myself nodding along and muttering, “Hell, yeah!” along the way.

After reading “Knights of the Open Palm,” it’s easy to see why Race Williams captured the public’s imagination a century ago. The character - at least in this story - lives at the intersection of The Continental Op and Mack Bolan. And that’s a very good place to be.