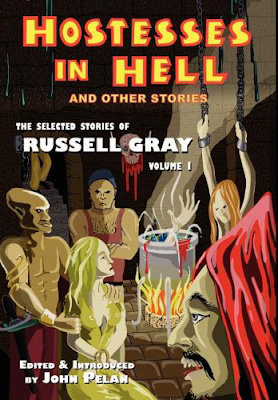 In the late 1930s, an enigmatic author named “Russell Gray” began churning out ultra-violent and repulsive horror stories for pulp magazines including Terror Tales, Sinister Stories, and Dime Mystery Magazine. These stories were like nothing America had ever seen before, and a modern reprint publisher called Ramble House has compiled two volumes of Gray’s stories for modern readers to experience.

The first volume is titled Hostesses in Hell and the second is My Touch Brings Death. The stories in both collections were chosen by genre expert John Pelan who also provides introductions to both volumes bringing valuable context to the stories and the author.

Russell Gray and Harrison Storm were pseudonyms utilized by Bruno Fischer for his specific brand of graphic horror stories. Fischer went on to become a successful author of paperback original crime and suspense novels in the 1950s, but those skills were honed as a pulp magazine author who cranked out a million words per year at his peak production.

In a modern world filled with graphic “extreme” horror, I was interested in putting the Russell Gray stories to the test. Do they hold up after 80 years? Can they be shocking to a jaded modern reviewer who has seen it all? I sampled a set of stories from the Hostesses in Hell volume to see what all the fuss is about.

The opening story originally appeared in Terror Tales March-April 1939 issue. The narrator is an inexperienced recreational sailor named Jay who takes seven women on his boat for a ride up and down the ocean shoreline. A spontaneous storm disorients Captain Jay and by the time visibility is restored, the small boat and its passengers are far from the mainland with the only safety being a nearby island. Jay’s boat is paralyzed, so they head for the island in search of help and shelter.

On the island, the group is greeted by a man claiming to be a medical doctor who looks more like a wild-eyed muscleman. He claims to run a hotel of sorts on the island where Jay and the ladies can stay until they can arrange for transport back to the mainland. Upon arrival at the large colonial house, the doctor confesses that the building is actually a sanitarium for the incurably insane.

This being a short-story, things go from creepy to violent and scary rather quickly. The women are naked, lunatics have escaped, and freakishly-deformed creatures begin menacing the island’s guests. It’s legitimately scary stuff and, as promised, extremely violent and disturbing. Overall, an outstanding pulp horror story.

“The Gargoyles of Madness”

This story originally ran in the August 1939 issue of Uncanny Tales. It opens with a police patrolman shooting a purse snatcher dead in the street. Newspaper reporter Glen Kane is covering the shooting when things get weird. The mugger was a prominent local banker who apparently lost his mind and attempted to rob the lady on the street while his face was contorted like a gargoyle. Even weirder: The intended victim had a gargoyle figurine in her purse. Readers of horror fiction can connect the dots faster than the cops or Newsman Gil.

Violent crimes by upscale citizens spread through the city. All the crimes involve tiny gargoyle statues and perps driven to madness. It’s almost as if getting your hands on a gargoyle figure makes you take on the features of the creature and go nuts in the process. When Gil tries to report on this odd phenomena, his editor spikes the story.

“School Mistress of the Mad”

This one first saw print in the January-February 1939 issue of Terror Tales. “Doom” is the name of a town nestled in the mountains populated by an inferior race of idiots looked down upon by the good people of nearby Amton. Chet is on sabbatical from his city job chilling out in sleepy Amton when he meets a beautiful woman named Linda driving through town headed into Doom. Stopping to ask directions, she discloses that she’s been hired as the new schoolteacher for the Town of Doom. As she drives deeper into the mountains, Chet can’t get her off his mind.

Chet learns that Doom was settled during the American Revolutionary War by a family named Gring who have reproduced and lived there ever since with no contact from the outside world. Generations of inbreeding have made the Gring clan into beast-like idiots.

The idea of the Grings hiring a beautiful schoolteacher in an illiterate town without a school defies logic. Meanwhile, several young women from the town of Amton have become missing lately. Could the Grings be taking some illegal measures to increase Doom’s genetic diversity? Chet sets off to Doom to investigate and maybe save Linda from the hillbillies fifteen miles away.

The author does a great job of building the dread and suspense for the reader who’s left wondering how bad it could be in Doom. I’m happy to report that the Grings clan is worse than you could imagine. This story is chilling and frightening if you enjoy satanic hillbilly stories in the vein of Deliverance or The Hills Have Eyes. It’s hard to believe that the story 82 years-old and still packs such a visceral punch.

For fans of suspenseful horror not afraid of some bloody exploitive violence, Russell Gray is the real deal. Hostesses in Hell may be the most consistently solid single-author horror anthologies I’ve read since Stephen King’s Night Shift. It’s so good that I’ve ordered Volume 2 (My Touch Brings Death) and can’t wait for the paperback to arrive. I’m a huge fan of Bruno Fischer’s crime-fiction novels, but his extreme pulp horror may be the best stuff he ever wrote. Highest recommendation.