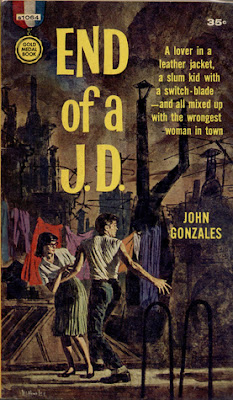 Robert Morton Terrall (1914-2009) is mostly remembered for his Ben Gates series written under the pseudonym Robert Kyle and his late-period Mike Shayne novels as Brett Halliday. He also authored a little-known three-book series as John Gonzales starring journalist Harry Horne starting with End of a J.D. from 1960.

Our narrator is Harry Horne, investigative reporter for a New York weekly news magazine, similar to Time (where the author started his own career as a professional writer). One night Harry returns home from a nightclub to find a beautiful young woman showering in his apartment naked - because that’s how people showered in 1960. After getting out of the bathroom and getting minimally dressed, she attempts to kill Harry in his own bachelor pad before taking off into the night. Who does that?

Before the attack, Harry had been working on a big story about juvenile delinquent gangs. He embedded with a youth gang called the Sorcerers who took a liking to Harry - until they decided they didn’t like his attitude. Harry sets out to determine who wants him dead employing a gambit that is one of the most clever I can remember in a vintage crime paperback. There are a lot of instances of cleverness and wit here, and Horne is a great narrator to guide the reader on this mystery.

Mostly, Death of a J.D. is a typical Terrall novel - well-written, smart, funny with a plot too convoluted for its own good. It’s also an artifact of its time when Americans were terrified of teenage delinquents with switchblades, pomade and rock-n-roll music. Now we just call that era “the good old days.” And in the big scheme of things, I suppose this yellowing paperback was a “good old book.” Recommended.

The Harry Horne books are: