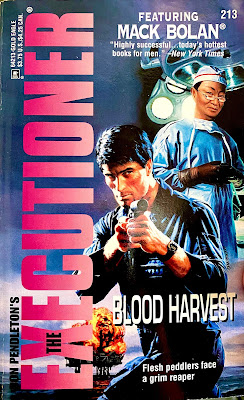 California native Mel Odom (b. 1957) was a prolific contributor to the Mack Bolan universe, penning almost 30 titles collectively in the Executioner, Super Bolan and Stony Man series. In addition, Odom has also authored a number of television and film tie-in novels such as Sabrina, The Teenage Witch, Roswell and Blade. But, my experience with Odom is strictly the Mack Bolan titles, in particular the Executioner #213 Blood Harvest, published in 1996. Why? The synopsis indicates that Mack Bolan is fighting zombies in New Orleans.

In the 1990s, one of the urban legends for young people on the bar scene was that a potential one-night stand could end up with one of you waking in a bathtub of ice and realizing that an organ had been cut from you by black marketers. This premise is used to its full potential in Blood Harvest as readers immerse themselves in this horror story in the book's prologue.

Posing as an F.B.I. agent named Fox, Bolan infiltrates a New Orleans homicide investigation to learn more about the organ harvesting ring. Most of the book's narrative features firefights every other chapter as Bolan targets key players in the organ heist. Eventually, Bolan teams up with a female investigator as the two follow the cohorts involved.

The zombie portion of the premise is somewhat accurate. The problem with the harvesting ring obtaining these organs by torturous methods is the timing. Because of the short lifetime of the organs, removing them and transporting them to the rich buyer provides a real sense of urgency. To resolve the problem, criminals use a voodoo priest named Papa Glapion to cast spells on the victims. By placing them in an "undead" hibernation - not breathing, but still technically alive - the bodies can be easily moved to different locations and then harvested to preserve the goods.

Those of you who know Odom's writing understand that he is a gun porn enthusiast by describing each make, model and caliber of the weapons used by the fighters. I don't typically like this style and feel that it takes me out of the scene completely. I want to feel what the characters feel, not the well oiled South African automatic shotgun with dual magazines. But Odom's writing is serviceable and Blood Harvest is high on action and short on plot. One doesn't confuse these high-numbered men's action-adventure entries for literary masterpieces. If you want Bolan executing baddies (and the undead) in bars, cemeteries, bayous and oil rigs you've come to the right place.