A Night for Treason 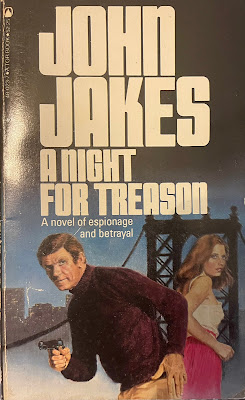 Before John Jakes struck gold with his Civil War epic North and South, he was a paperback author for dudes like us. A Night for Treason was a 1956 spy thriller that was released as an Ace Double with many subsequent reprints over the years.

Our hero is an American secret agent named Max Ryan. The novel begins with an exciting action set-piece with Max hijacking a truck filled with military supplies. It’s a violent and fast-paced opening that sets the tone for this short, peppy paperback.

We are quickly introduced to our villains: a shadowy European-based organized crime and intelligence cabal known only as The Combine seeking to steal American industrial secrets for its own profit and benefit. The focal point for this showdown between The Combine and Max’s agency is an Atomic energy conference hosted on the estate of an Air Force colonel. It’s up to Max to figure out who the technology thieving Combine spies are among the guests and neutralize them without getting whacked himself.

The Air Force colonel has a sexy, 26 year-old niece named April who is the hostess of the conference and a pivotal player in the weekend’s intrigue. John Jakes keeps the narrative exciting with well-crafted action scenes every few pages. His plotting is basic but serviceable.

Overall, this early work from a future famous author is about as good as one of the better Nick Carter: Killmaster installments. If you can score a cheap copy of A Night for Treason, you won’t regret reading it. However, it’s unlikely you’ll remember it for long after you’ve moved onto the next paperback in your stack.