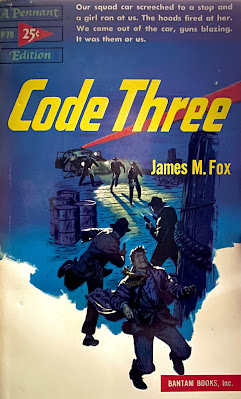 James M. Fox was actually Johannes Matthijs Willem Knipsheer, a Dutch author born in 1908. He moved to Los Angeles after WWII and started writing mystery novels. His best known work is the Johnny and Suzy Marshall series, published between 1943-1957. My first experience with Fox is his three book series of police procedural novels starring Detective Sergeant Jerry Long. To test the waters,  I tried the series debut, Code Three, originally published in hardcover by Little Brown in 1953. It was published as a paperback in 1955 by Bantam under their Pennant Mystery brand (P79). At some point the book was also published as Dead Shot.

Jerry Long, and his partner Chuck Conley, are called to the scene when a dead body is found under a tree in the park. The dead guy's gruesome appearance suggests he had been given the boots by some tough guys and then dumped. The only identification is a tattoo, which prompts Long to call his buddy at the precinct's records department to inquire about it.

The dead guy is identified as a local bookie, so Long pursues the guy's ex-wife, a fleeing woman named Jenny, to get some answers. When he drives up to her apartment, guns explode and the woman runs for safety. Later, Long connects the clues that lead to a powerhouse mobster named Manny. Where the book gets really interesting is that Long, who's a city detective, collides with the county sheriff's office. The tug-of-war is one of those “you're traipsing on our turf” territorial disputes. However, Long finds evidence that Manny is controlling the county cops, which forces him on the outside of the investigation.

Code Three reminded me of a 1958 paperback called City Limits, the second installment of the Mike Macauley series written by Richard Deming using the pseudonym Nick Marino. The central plot of the city versus county law enforcement is similar, complete with the mobster and the hero colliding. Typically, these story elements are often found in crime-fiction detective novels. Adding to the gritty, hardboiled style, I found Fox's writing similar to Mickey Spillane – blood and guts, tough guy talk with fisticuffs, babes, and cold steel.

My major drawback to Fox's Code Three is the story seems jumbled, fragmented, and often dense in the details. I had a very hard time understanding what was happening, and couldn't quite comprehend the flow of events. Even at a relatively short 120 pages, I struggled to finish this book. I found myself counting pages, which is a surefire signal that I'm completely lost. I love the main character, found his tactics compelling, but the plot development and presentation was jarring. I'm not giving up on Fox with just a small sample size. But, surely you can do better than Code Three if you want to sample the author's work.