Judge Not My Sins 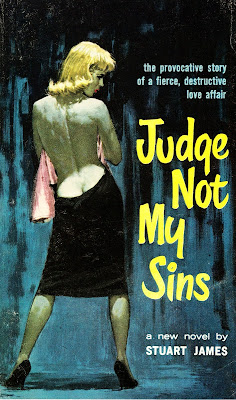 As I documented in my Frisco Flat review, Stuart James was a staff writer for True and Popular Mechanics as well as a sports reporter for the Delaware Valley Advance. He authored original paperbacks for lowly publishing houses like Tower and Monarch. Thankfully, some of his novels have been dusted off and resurrected thanks to Cutting Edge Books. Enjoying their new edition of Frisco Flat, I chose to read Judge Not My Sins next. It was originally published in 1951 by Midwood.

What I enjoyed the most about James' narrative may be something he didn't intend for me to enjoy all that much – pulp story writing deadlines and publishing. David Markham, the book's protagonist, is a 34 year old pulp writer living in New York City. He wants to write the great American novel, but his agent encourages him to grow as a writer and take the necessary stepping stones to achieve greatness. He puts David through the paces, first with newspapers, then on to writing for the pulps, and then articles as he moves into a better market. But, readers are introduced to David as he navigates the world of pulp fiction, the middle rungs on the tall literary ladder.

David's life is at a crossroads. He's become complacent with writing pulp fiction, a problem he analyzes by suggesting he has already “written the same damned story fifty times” and to write another will simply require changing the characters. His agent says the writing is very good, it isn't literary garbage, and that “blood 'n guts” sells. Money is the reason David clicks the typewriter keys. He's married, although separated. He has two kids, but he only sees them once a month. His paychecks mostly go to his wife and their mortgage. All of these headaches catapult David into the arms of a mentally deranged woman named Leslie.

Like a Gil Brewer or Orrie Hitt novel, Judge Not My Sins develops into a devilish relationship study. Leslie is gorgeous, lives with her dog, and meets David for a one-night stand at a bar. David becomes engrossed with the woman and finds himself hopelessly falling in love. But, Leslie doesn't like David's commitments to his wife and kids. She also doesn't understand his writing career and what he hopes to achieve. As she beckons chaos and confusion, David's agent and wife prove to be responsible and less pretentious. It's this storm of emotions that drive David to the brink of madness while competing to meet five writing assignments and a movie novelization, his so-called “big break.”

Based on publishing houses and lack of a household name, it's so easy to write Stuart James off as a hack sleaze writer. But, his career deserved better. He's such a great author and injects a personal insight into this novel, what is essentially a book about the writing experience. I'm sure that the career turmoil and rejections riding David were all firsthand experiences James suffered throughout his journey.

Judge Not My Sins is a powerful look at self-absorption, complacency, mental illness, and the complexities of marriage and divorce. It's a paper life, but its life. I'm not sure why James wasn't able to break into the middle echelon of paperback writing (at the very least), but based on this book alone, he deserved a better hand than he was dealt. Hopefully, this new shuffling of the deck by Cutting Edge Books will deal him a win.