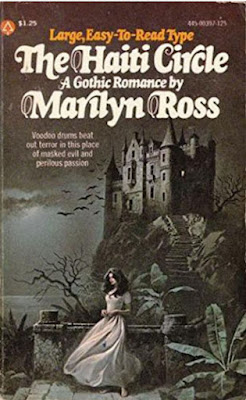 Our coverage of beautiful women running from scary places continues with The Haiti Circle, a 1976 gothic paperback with the name Marilyn Ross on the cover. The author is really William Edward Daniel Ross, a prolific Canadian writer that authored over 50 gothics in the 60s and 70s. A few of his books have been published as audio books recently by Paperback Library with narration by Romy Nordlinger.

In The Haiti Circle, a woman named Agnes is suffering from the recent loss of her mother. After a nervous breakdown, Agnes journeys to Haiti for a vacation and a life reset. It is here that she meets a Creole doctor named Martinez, who immediately falls in love with her. Understanding she is a teacher, Martinez introduces Agnes to wealthy widow Mr. Dodge and his daughter Germaine. Agnes learns that Germaine's mother committed suicide by jumping from the high walls of Seacrest, the family mansion. Now, Germaine is in need of a tudor and caregiver.

Once Agnes starts her new job, she begins hearing rumors of voodoo rituals on the island. There are a number of shady characters living at Seacrest, so speculations runs rampant on which white people are involved in the voodoo cult. Agnes is targeted by some sort of curse that places a tarantula in her bed and bats in her room. Further, Agnes sees a “zombie” outside of the mansion and learns it is a link to a prior suicide before the Dodges took ownership of Seacrest.

Ross uses essentially the same character as the female protagonist in each of his novels. Agnes is the same cookie-cutter character as Jan (Phantom Manor), another Jan (Dark Legend), Victoria (Dark Shadows series), and Stella (Fog Island) – teacher/tudor, vulnerable, single, unsuspecting. The mysteries are numerous, which makes the book a little more tolerable. Also, the idea of a zombie and the whole voodoo-cult-thingy is just wacky enough to make the book interesting. I had a few guesses on who the culprit was, but the ending surprised me.

The Haiti Circle is one of the better Ross novels I've read. Recommended for its spooky ambiance, a number of compelling characters, and a surprise ending. I also enjoyed the audio book version, although I'm tired of Nordlinger's narration.