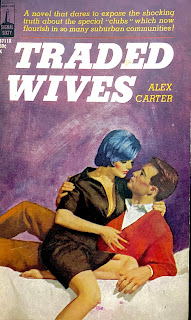 Celebrated jazz musician and author Charles Boeckman authored crime-fiction short stories and novels using his own name through the mid 20th century. However, using the pseudonym of Alex Carter, he authored racy, sexually-charged romance paperbacks for publishing houses like Beacon. I've enjoyed his writing, especially his Alex Carter novel Boy-Lover (1963). I recently purchased another Carter novel, Traded Wives. The book was published in both the US and Canada simultaneously in 1964. The American version was published through Beacon (8711X, cover artist unknown). The Canadian version by Softcover Library (S95157) recycled Clement Micarelli's painting from Orrie Hitt's 1962 novel Love Thief.

The novel presents three couples and a single woman living in a new housing community called Garden Acres. Each of the couples is struggling in various ways that revolve around intimacy. Boeckman depicts each marriage through revolving chapters that explain each character's backstory, the evolution into marriage, and the physical wants, desires, and jealous rage within this sexual suburbia.

Debbie and Bobby have just moved into Garden Acres after graduating from high school and becoming pregnant. Their parents are wealthy, respectable contributors to the community that can't afford any negative influences. They immediately force the two kids to become married and quickly convert the couple into expecting, stereotypical middle-class suburbanites. The problem is that Bobby is still running around with the town's young hotties and Debbie isn't thrilled to be settling down after bedding down the senior class's male students. That's a real problem. 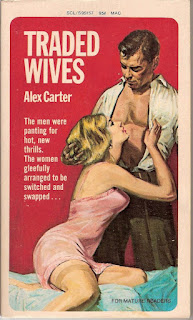 Charles is an alcohol distributor and sales rep that travels the back roads of America selling booze. He smokes cigars, drives a Cadillac, and has a loud-mouth that mostly spews dirty jokes. After meeting backwoods country girl (and virgin) Barbara Lee, he talks her into marriage and they quickly move into  the thriving sexual landscape of Garden Acres. Barbara Lee wants to pursue a college education and learn more about the modern world. After conquering Barbara Lee, Charles sets his eyes on his neighbor Cheryl.

Tony is a white-collar guy living the American dream – playing golf on the weekends, mowing green grass, and relaxing in the shade with his newlywed wife Cheryl. The problem is that Cheryl isn't into sex, thus creating a physical barrier between the two. Tony is sexually frustrated with Cheryl and she is equally angered with his insistence on intimacy.

Boeckman was just such a great storyteller of these noir novels. Despite the titles and covers, these novels aren't any different from a Nora Roberts novel today. There are no graphic sex scenes or much (if any) profanity. In cinematic ratings, these are probably PG-13. But, that doesn't make them any less intriguing or enjoyable.

The story-lines are detailed with plot and character development that's simply superb. The narrative thrusts these unhappy couples into a wild mix of sex, fantasy, and appeasement. Debbie with Tony and Bobby, Cheryl with Tony, Charles with Cheryl, and Bobby with a divorced, sexually starved woman named April. It's a mingling of affairs and it's fantastic. I also enjoyed the “crime-noir” aspect of Tony, Charles, and Cheryl's love-triangle. It becomes violent and engaging and is probably the real highlight of the novel. The end result is that Traded Wives is highly, highly recommended.