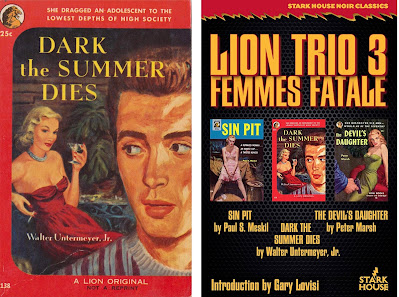 Walter Untermeyer Jr. (1915-2009) was a New York lawyer and a WW2 Navy veteran who only authored two books in his life. His first paperback, Dark the Summer Dies, from 1953 has been reprinted by Stark House as part of a trio of vintage femme fatale noir novels from Lion Books.

At the club, Tony meets a super-hot flirtatious married woman named Vicky, whose husband is frequently away on business trips. You see what’s coming? Of course you do. She invites Tony over to enjoy a porterhouse on the grill, and you know the steak isn’t the only meat getting tenderized that night.

When writing in Tony’s voice, Untermeyer mimics the colloquial tone of Holden Caulfield from J.D. Salinger’s A Catcher in the Rye, a successful novel released two years earlier. His plotting, however, needs some serious help. The paperback is a relationship drama about pushing the limits of social norms and sexual taboos, but not much happens for most of the book. It’s certainly not a crime novel, and the “shocking” ending will land with a thud to anyone accustomed to reading actual shocking paperbacks from the era.

I wanted to like this novel with every fiber of my being, but it was pretty lousy — despite some well-written prose. The Stark House collection containing this book also includes Sin Pit by Paul S. Meskil, an absolute masterpiece of the femme fatale noir genre, so it’s probably still worth your $20.