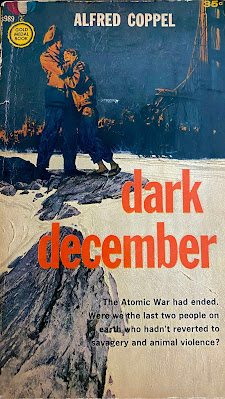 According to Wikipedia, Alfred Coppel, real name Jose de Arana-Marini Coppel (1921-2002), served as a fighter pilot in the United States Army Air Forces during WWII. The Oakland author then began a prolific writing career using pseudonyms like Alfred Coppel, Robert Cham Gilman, and A.C. Marin while writing for pulp magazines. Coppel is mostly known for science-fiction, but he also authored action-adventure and espionage. He transitioned into full-length original novels, including his bestseller, Thirty-Four East, about the Arab-Israeli conflict. My first experience with the author is his post-apocalyptic novel Dark December, published by Fawcett Gold Medal in 1960.

U.S. Major Kenneth Gavin spent WWIII in an underground bunker in Alaska. From that safe and secure location, Gavin was a “missile-man”, a launch pad operator in charge of firing nuclear warheads at the Soviet Union and other foreign enemies. After two long years of global destruction between warring countries, the military, and ordinary life, has crumbled. Sensing no real purpose to the missile launches, Gavin is released from his service in Alaska.

It is Gavin's intention to travel south into San Francisco to finally reunite with his wife and daughter. It has been months since he had spoken with them and he just wants to return home. But, the journey won't be easy. Most of the population has descended into anarchy, with diseases, malnutrition, and radiation being catalysts for humankind's ruin. There is still a military presence available, so Gavin aligns with a military patrol led by Major Collingwood, an arrogant, mentally unstable superior that feels right at home within the destruction and chaos. When Gavin witnesses Collingwood ordering a group of bandits to be executed, the two come to a disagreement. The end result – Collingwood swears he will murder Gavin.

Escaping from Collingwood, Gavin meets up with a young woman and a boy and the three form a partnership to travel safely through California. Unfortunately, they run into a fanatical group of teenagers that have a penchant for torture and depravity. When Gavin discovers they have a Soviet pilot locked in a shed, he learns just how dark and sadistic civilization has become.

Alfred Coppel does everything right in his nightmarish look at a bombed out America. It's the traditional monomyth featuring the lone hero on a quest through a perilous landscape, essentially the oldest storytelling formula. Coppel's examination of humankind's descent into sadism and nearly Neanderthal behavior is the book's real strength. Gavin is the unconventional hero, a man who has seemingly killed millions with the press of a button, but now can't cope with the idea of taking another life. His journey through the wasteland, as a pacifist, is really a unique twist on what would otherwise be an “all guns blazing” survival tale like the numbered men's action-adventure titles that would arrive 20+ years later – The Survivalist, Deathlands, The Last Ranger, Phoenix, etc. Coppel's writing is more insulated, concentrating on human psychosis or the boundaries of sanity when threatened with extinction. It's smart.

If you enjoy post-apocalyptic novels, then this is an easy recommendation. But, if you enjoy books ranging from Lord of the Flies to novellas like Heart of Darkness, then this should be an appealing, disturbingly entertaining read as well.