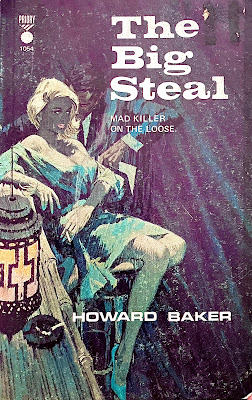 Irish author Athwill William Baker used pseudonyms like Howard Baker, W. Howard Baker, W.A. Ballinger, John Long, Desmond Reid and Richard Williams to write crime-fiction, science-fiction, and espionage novels. He began his career as a journalist, joined the Army during WWII, and later became the editor in charge of Panther Books. He's mostly remembered for his contributions to the serial police procedural Sexton Blake, inspired by Sherlock Holmes. He also authored a 16 book series starring Richard Quintain, a British Secret Service agent. My first experience with the author is his stand-alone caper novel The Big Steal. The book was published in 1964 and has been printed a total of four times, each with different artwork and different publishers.

Sep Ryder was an Italian veteran of WWII that fought for the Fascists and personally knew Mussolini. Due to his violent behavior, and military record, he was placed in the mental institution Broadmoor by the British government. However, he escapes the facility and puts together a plan to rob $2.5 million from Heathrow Airport. But, he needs a team.

Baker writes this short novel as one long series of introductions. We meet Phineas Norton and his wife Marcia and quickly learn that Ryder and Marcia are having an affair. Then there is Bill Simmons of the Daily Post, his ex-wife, guys named Bruno and Clifford, and the list goes on and on. The plan is for Phineas to become a passenger on board one of the aircraft landing at Heathrow. He will warn the crew that he has a bomb on the plane. This puts the entire airport on lockdown and a lot of people on the ground preparing for the plane's arrival – ambulances, cops, journalists, etc. While all of this commotion is happening, Ryder and his drivers, gunmen, and strong guys will rob the place and drive an ambulance out of town. Phineas then will tell them he made the whole thing up. Because there is no bomb. Until there is one.

This book was mostly enjoyable and could have been something special if the cast of characters was cut in half. The pacing was a frenzy of activity, propelling the plot and creating a lot of drama, intrigue, and excitement for the book's payoff. But, there's just so many characters that it was hard to keep track of histories and where all of these people are in the plan. I spent a majority of my reading experience confused, but Baker's writing was really good and kept me interested. In the future, I'd like to read another Baker novel to compare quality. Lukewarm recommendation for The Big Steal.