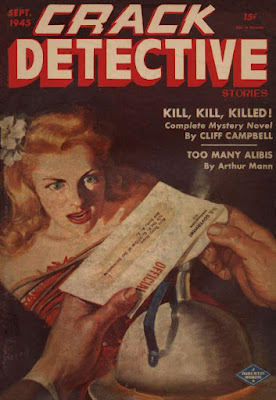 It's hard to believe that just down the road from me, here in the Sunshine State of Florida, the Nazis invaded. It's a little known fact, something that isn't often discussed in the history books. But, on June 16th, 1942, a submarine assisted four German spies to step on the sands of Ponte Vedra Beach, just south of Jacksonville. Their mission was to destroy bridges and the parts of the railroad system using dynamite. Thanks to the efforts of the FBI, they were captured and executed before their mission was accomplished.

Using this unique piece of history, Frank Kane, author of the successful Johnny Liddell private-eye series, constructed a short-story called "Thirty Pieces of Lead" for the September, 1945 issue of Crack Detective Stories. To my knowledge the story has never been reprinted, but you can read it for free HERE or scrolling below.

At the story's beginning, an Italian prisoner-of-war named Musico is being interrogated by a Gestapo colonel. Musico has served time in a concentration camp, along with his mother and wife. The bullish interrogator suggests that Musico was separated from them at some point, and would probably wish to visit with them again. Musico tells himself that he already knows the fate of his loved ones. But, he plays along. The colonel explains that a group of highly trained professionals is planning a landing on the American coastline, and they want Musico to assist them. In return, Musico will get to see his wife and mother again.

Musico is an ex-mob runner that ran bootleg products out of Chicago ten years ago. Musico tells the colonel to call his old mob boss, and explain the landing operation and ask that they pave the way with the police and Coast Guard. To insure the request is legit, Musico provides his interrogator a password so the mobster will know the request came from him. Musico says the mob has no loyalty to America and will work with the Nazis. Further, Musico volunteers to join the landing in an effort to accomplish the mission and to see his loved ones again. But, Musico has a clever plan for revenge in mind.

At just a few pages, this story has so much life in it. It explodes with detail and ties into this little piece of history in a really unique way. I love the mobster aspect to it, and the idea that the mob and the Nazis are featured in the same story – two despicable factions that are being combated by this courageous, yet defenseless prisoner. Short stories can really be hit or miss, but this one was a sure-fire winner. Recommended!