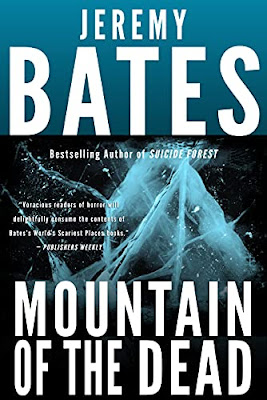 We've covered books by horror author Jeremy Bates, most notably his World's Scariest Places series of stand-alone novels. Each book in this series is based on a particular place that is closely associated with a tragedy, haunting, or unexplained event. Case in point is the Dyatlov Pass Incident, one of the greatest unsolved mysteries of the 20th century. Bates uses this incident and location to place his horror-adventure novel Mountain of the Dead, originally published in 2018 via Ghillinnein Books.

The book is partially presented in first-person narrative by Corey, a bestselling author of non-fiction. He recounts his harrowing expedition to Russia's frosty Northern Ural mountains, one of the most inhabitable regions on Earth. Corey, and his filmmaker buddy “Disco”, journeyed to the region to research the Dyatlov Pass Incident, a 1959 mystery involving nine Russian hikers that experienced gruesome deaths that can't be explained even within the scopes of modern science and forensics.

In between Corey's portions of the novel, Bates weaves in events from 1959 concerning the actual hikers that were killed in the incident. Bates takes liberties with the incident and victims to create his own version of the murders, complete with Cryptozoology, actual photos, and a rather doomy title for these chapters counting down the amount of days left to live. It's quite fascinating.

At 420 pages, approximately 15 characters, and two different timelines, Mountain of the Dead may seem intimidating. Oddly enough, it all blends together seamlessly to create one of the better horror novels I've read in some time. Corey's account of what happened to him in Siberia, the underground laboratory, hideous experiments, and ultimate encounter with the horrors of the Dyatlov Pass Incident were simply awe-inspiring. There's a real sense of adventure that envelopes the story as Corey is partnered with a female scientist, a hunter, and a remote guide to explore and locate the history of the events deep in the rural, icy mountain range. Likewise, Bates presents this same snowy adventure with the original nine hikers in 1959's trek through the high-mountain wilderness.

As if Bates needed any further elements to propel the plot, there is a through-story arc regarding Corey's girlfriend and the tragedy that affected her years ago. Through life fragments and story pieces, readers learn about her life and, by the book's final chapters, her fate. So, there's an embedded mystery within the mystery. It's wildly clever, unique, and entrancing.

Jeremy Bates is extremely successful and remains one of the bestselling, self-published authors of his genre. Books like Mountain of the Dead are testimonies to his success as an original, believable, and tremendously entertaining author. I love this guy.