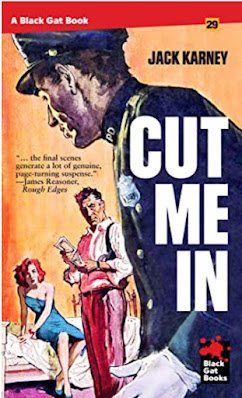 According to Stark House Press, the publisher that reprinted Cut Me In (1959) via their subsidiary Black Gat Books, Jack Karney was born in New York in 1911 and specialized in crime-fiction. He was married with three children and spent his entire life in the same Lower East Side neighborhood in New York City. He tried out for the police department, but ultimately ended up working in the Civil Service within the District Attorney's office. He authored a number of titles like Tough Town (1952), Cop (1952), and Knock 'em Dead (1955). As Mike Skelly he authored the novel There Goes Shorty Higgins (1953). Cut Me In is my first experience with Karney's work.

This novel is similar to other 1940s and 1950s crime-fiction where the rise from rags to riches becomes a captivating look at criminality. Like Benjamin Appel's The Life and Times of a Tough Guy (1960) and Ed McBain's Big Man (written as Richard Marsten, 1959), Jack Karney centers his narrative on Coley Walsh, a young beat cop working the New York streets. His wife died, and now he raises his crippled son while living with his mother on swing shifts. Coley's righteous path becomes corrupt with the simple longing for a patrol car and a promotion to investigator. Coley decides to cut some corners on the way to the top.

While working the beat, Coley saddles an armed robber that is fleeing from the police. In a devilish conversation, Coley learns that the police precinct is corrupt with several key personnel working hand-in-hand with the Syndicate. They run the protection rackets, gambling joints, and swindle politicians to do their bidding. Coley conceives the idea that he should assemble a small group of police officers willing to push the Syndicate out. But, these criminal elements would then be replaced by Coley and his guys. Instead of looking out for the Syndicate, they should become a new Syndicate.

Through 200 pages, Karney documents Coley's rise through the ranks from small time to the big man. The most compelling portions concern Coley's relationship with a small business owner named Joseph Cantor and his adopted daughter. Coley looks out for Cantor, and understands he represents everything right about America – work hard, build a legitimate owner-operator business, serve the community. In creating his criminal empire, Coley realizes guys like Cantor are prime targets for protection rackets, thus an emotional conflict arises within Coley's pursuit of fortune. It's this conflict that really propels Karney's well-written narrative.

Cut Me In was a wonderful reading experience laced with criminal plans, fall-guys, payoffs, heartbreaks, and violence. Karney's writing style relies heavily on dialogue to tell the tale, and the author created enough diverse characters to keep the story alive and moving. The book's beginning and ending are its strongest parts, with the finale a real barn-burner with flourishes of action and cool-headed resolve. The balance was exceptional, and a difficult feat considering the moving parts. Karney was a pro and Cut Me In must surely represent some of his best work. Recommended.