Island of the Pit 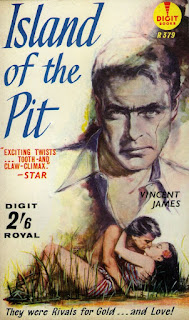 According to Goodreads, Irish author James Gribben (1915-1986) authored plays, short stories and novels under his own name and also under the pseudonyms Kingsley West and Vincent James. There isn't much information online, but I did locate a paperback he wrote under the James name called Island of the Pit. It was originally published in England by Ernest Benn, Ltd in 1955 as a hardcover, later published by Messner in the US in 1956. My version is the 1957 Popular Library (800) paperback, although it was reprinted a second time in paperback by Digit Books (R379) in 1960.

Joe Trasker and his wife Helen have been casually sailing the Pacific Islands the last two years. On their return trip to the US, they stop by an inhabited island to buy supplies for the voyage. It's here that Joe is reunited with an old war buddy named Kane Hadley. In the brief backstory, readers learn that Joe is disabled due to mortar-shell fragments in his leg. Kane was the guy that carried Joe to safety while under fire.

After a night of drunkenness, Joe and Helen start their return trip, but unfortunately make an invite to Kane to join them. Kane accepts, and then things grow chaotic over time. 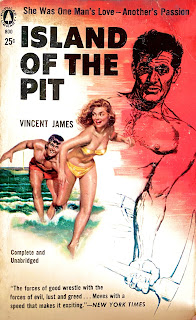 Kane has an affection for Helen, and she becomes uncomfortable in his presence. Joe notices that Kane hasn't gotten over the war, as if he still misses the action. The three of them discover an abandoned island, and upon further inspection, learn there is gold laced throughout the rocky terrain. Kane, who has experience as both a smuggler and gold miner, insists that they stop for a few weeks and get as much gold as they can carry. Joe and Helen are simple people, and don't have a deep desire for wealth. Kane is the opposite, lusting for gold so he can buy another boat to capture more gold.

Island of the Pit is a character study of two very different people and their conflicts with insecurity, greed, jealousy, and other weak conditions of the human spirit. Kane's discovery of the gold, combined with his own restless demeanor, is a negative combination that's further hampered by his attraction to Helen. This greedy darkness envelopes Kane's thoughts and actions, eventually transforming him into a lethal aggressor.

Gribben's writing is so descriptive and I really enjoyed his use of lighting to depict the story's mood. There are a number of passages where light is used to foreshadow coming events. It's a really unique presentation that helped broaden the limited setting of these three characters on a deserted island. I also enjoyed the commentary on marriage and the “less is more” message that reinforced Joe and Helen's position as the wiser, level-headed supporters. They truly want to rehabilitate Kane, but realize that his self-interest is too prevalent.

Island of the Pit was just a real pleasure to read. It's a smart, emotional journey that's compelling despite the predictability. The descriptive writing style, dynamic characters, and social commentary were well worth the price of admission. You owe it to yourself to track down this lost gem.