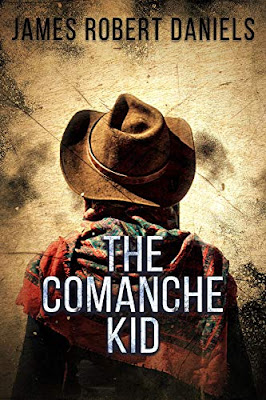 James Robert Daniels is a professional actor and director that performed and wrote for theaters like Shakespeare and Company, Cleveland Play House, Kansas City Repertory, and Asolo. He performed at the Kennedy Center, and contributed to Shakespeare festivals in Illinois, Texas, and Oregon. Daniels served in the infantry in the Vietnam War, and used some of his military experience in his first novel, The Comanche Kid. The western was published in 2021 by Cutting Edge Books.

The book begins with one of the more powerful opening paragraphs I've read:

It was early spring when the ocotillo was in bloom that the raiders come down on us and killed everyone but me and Sally. I remember the ocotillo because the tiny red blossoms looked like splattered blood, even though the rains had washed most of the real blood into the earth by then.

The narrator is Jane Fury, a 16 year-old girl who survives a Comanche attack that savagely kills her parents and brother. In the melee, her sister Sally is taken captive. After burying her family, Jane tracks down some of the murderers, killing four of the raiding party with her father's rifles. Her primary goal is to find and kill her mother's rapist and murderer, a Comanche warrior deemed One-Eye.

After five action-packed chapters, the novel settles into a literary, coming-of-age tale when Jane, disguising herself as a 14 year-old boy (nicknamed The Comanche Kid), herds her family's remaining cattle into a larger and longer cattle drive. The comparisons to Larry McMurtry's Lonesome Dove are probably found here, the inevitable long and winding trail drive that forces the cowboys, and Jane, into battles against nature, each other, and the Comanche tribe. In this regard, I would also compare it to Ralph Compton's successful Trail Drive series.

On the Six-Gun Justice Podcast, Daniels explained to host and author Paul Bishop that he was influenced by Clair Huffaker's The Cowboy and the Cossack. The concept of a long cattle drive developing characters, personalities, and story helped define the style and framework of The Comanche Kid. Additionally, the author explained that the copious amounts of profanity in his book was something he personally experienced during his military career. Cowboys used coarse language, and the book is more realistic because of it. Daniels' love of Shakespeare is a large portion of the book's dialogue, central to a character nicknamed Shakespeare and his romantic chemistry with Jane.

My personal takeaway from The Comanche Kid is twofold. One, the book is certainly a traditional western tale, falling into one of only a handful of possible genre plot devices - the cattle drive. I enjoyed the thirst for revenge and the extraordinary action sequences that brought the revenge to fruition. But, it's a long journey between points A and B, and by page 300 I was simply worn out. I think I needed something a little more to keep me turning the pages.

Thankfully, the second, and most prevalent aspect, is that The Comanche Kid is a conversation between Jane and God. This was the unique, most compelling portion of the book. Jane was raised as a God-fearing Christian, but struggles with her beliefs and faith after her family's murder. Throughout the book, she questions God, demands that her questions be answered, and walks a balance beam of faith and non-belief. I thought this challenge for forgiveness, retribution, and the struggles of devotion carried the narrative into a thought-provoking realm of enjoyment.

If you enjoy sweeping, more epic western novels, then The Comanche Kid is your ticket to escapism. Daniels provides a sense of stirring adventure while successfully capturing an authentic, violent portrait of life on the frontier. Recommended.