Blood of my Brother 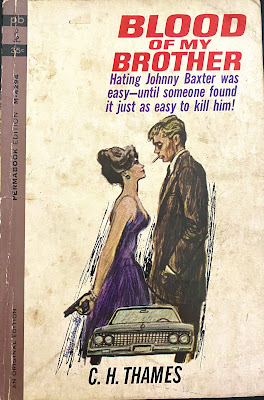 Roll out the red carpet. Vacuum it. Fluff it a little with the heel of your shoe. Why? The festivities are about to begin. The Hall of Shame is receiving its newest member, the 1963 paperback Blood of my Brother, written by the very talented Stephen Marlowe (real name Milton Lesser). Only, Marlowe didn't want to use his name for this turd. Instead, he used the name C.H. Thames. To rub salt in the wound, Armchair Fiction reprinted this book.

In the opening chapter, spoiled college kid Johnny Baxter is with an unknown person cracking a safe in a mansion. Next chapter, Johnny is found floating in the ocean. Dead. His car went off of an embankment and crashed into the lake. Johnny's father is devastated and regrets some of his fatherly decisions in life. Johnny's step-brother Dave is a modest attorney in town and the star of the family. He goes to identify the body and believes his brother was murdered.

Dave believes there is foul play because Johnny's car is turned the wrong way in the lake. That's it, that is the big piece of evidence. Pay no mind to the flask, the fact that his brother was an alcoholic, the reckless lifestyle, the fast Jaguar. Just the wrong direction in the lake. The next 129 exhausting pages consist of Dave interviewing the college faculty, Johnny's roommate, the fraternity brothers, and Johnny's father. Readers already know that Johnny was stealing money from his father, so that little little morsel is quickly chewed up and dismissed. Second, if Dave can't figure out that Johnny's roommate, Tony, is the killer, then there is no reason for him to be an attorney. Here's some clues:

1 – Tony is flatass broke.
2 – Tony has clothes and jewelry belonging to Johnny.
3 – Tony has a freakin' gun under his bed.
4 – Tony won several medals for killing a ton of bad guys in the Korean War.
5 – Tony tells lies.
6 – Tony seems jealou....nevermind, you get the idea. TONY IS THE DAMN KILLER!

But, Dave interviews hundreds of people and discovers that Johnny has cleverly blackmailed every one of them. He's taken photos of them doing the humpty-hump, caught them in elaborate forgeries, threatened to report cheating to the faculty, and on and on. It's ridiculous to think Johnny Baxter has this many blackmailing schemes in the works and that this little California college is hosting this many blackmailing schemes. These people aren't that interesting. But, none of it matters! Pages 12 through 141 serve absolutely no purpose whatsoever. You can read the first 12 pages and the last 9 and that's the book. Open, shut, the end. A pointless endeavor. My suspicion is that Marlowe knew this book sucked. That's why he didn't want his name associated with it. I also think that he gave his readers a secret code so they would stay away from this novel - the title. The acronym is B.O.M.B.

It brings me great pleasure to return this book to its little plastic book condom, complete with a piece of sticky scotch tape across the horizontal flap. I have no plans to ever open it again. I'm placing it in our virtual purgatory for bad books. Thus, the Hall of Shame remains open. This book does not.