A Touch of Death 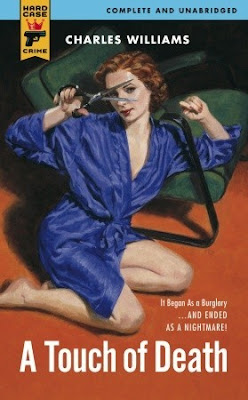 Charles Williams (1909-1975) is one of the highest-regarded (and most under-appreciated) writers of American paperback crime fiction. As such, it only made sense in 2011 for Hard Case Crime, the prestige reprint house at the time, to re-release Williams’ 1955 novel, A Touch of Death.

It’s been six-years since Lee Scarborough left the world of football, and now he’s down on his luck trying to sell his car to earn some cash. He meets a hot chick named Diana with a proposition. The girl knows where there’s a stash of $120,000 in stolen money, and she wants Lee’s help to recover it. As Diana explains, a banker named Butler disappeared two months ago leaving a $120,000 cash shortage behind at the bank. Diana’s theory is that Mrs. Butler murdered her embezzling husband, disposed of his body somewhere, and has hidden away the $120,000 for a rainy day.

Diana’s plan is to ensure Mrs. Butler is away from her house for a couple days while Lee tosses the place in search of the stashed cash. Lee negotiates a split for a sizable portion of the loot if he finds the cash. Things go sideways almost immediately and Lee becomes an inadvertent kidnapper of Mrs. Butler while the path to victory becomes more and more complicated.

The shifting alliances throughout the novel are entertaining, and the interplay between Lee and Mrs. Butler has some of the best dialogue of Williams’ career as a writer. However, the plot meandered quite a bit and wasn’t always up to the high standard previously established by Williams. A Touch of Death is in the middle-tier of Williams’ non-maritime books. It’s certainly not the best of his work (that would be River Girl) but it’s definitely worth your time.

A Touch of Death was also released as Mix Yourself a Redhead (U.K.) and Le Pigeon (France).