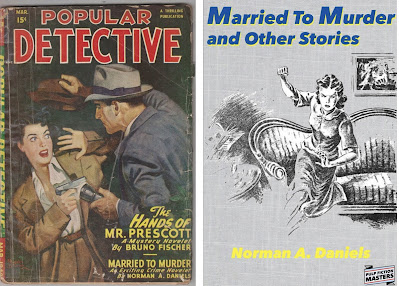 Married to Murder began its life as a novella by Norman Daniels (real name: Norman Arthur Danberg, 1905-1995) from the March 1949 issue of Popular Detective. It has since been compiled into an anthology of Daniels’ work by ebook reprinter The Pulp Fiction Book Store.

Dan Adair is revolted by his new wife Janet. Dan suspects that Janet murdered his crippled brother Russ a week earlier, but Janet is pretending that she never knew the man. Russ went over a cliff in his wheelchair on the outskirts of his sprawling estate falling to his death. The prevailing theory is that Russ killed himself or died in an accidental fall, but Dan doesn’t believe that for a moment. Now Dan has moved into his brother’s mansion with his new bride in hopes of getting to the bottom of the situation.

At the time of Russ’ death, Dan was engaged to Janet. His theory is that she killed Russ, so Dan (and presumably his new wife) could inherit Russ’ portion of the family’s wealth. There’s some decent physical and circumstantial evidence to indicate that Janet had been to the mansion around the time Russ died - something she denies. If Dan can prove that his blushing bride killed his brother, his intention is to murder Janet and take his revenge. But is it also possible Janet’s plotting to kill Dan to have the estate to herself?

As pulp magazine mysteries go, Married to Murder is a propulsive and compelling read. There are several action set-pieces, and Daniels’ writing is economical and solid. If you’re somewhat familiar with 1940s pulp fiction, you know the direction the mystery is headed, but it’s still an enjoyable ride. This story is definitely a fun way to kill an hour.

For reasons unclear to me, The Pulp Fiction Book Store doesn’t sell its ebooks on Amazon.com. Instead, their entire library is sold directly for download from their website HERE. Loading the MOBI file into my Kindle was easy enough and well worth the effort.