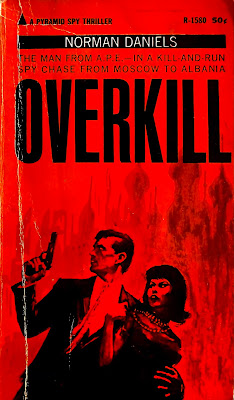 Norman Daniels (real name Norman Danberg, 1905-1995) was a prolific American author who successfully shifted from pulp magazines to paperback originals in the 1950s. After long running pulp series titles including The Black Bat, Daniels saw a resurgence in his popularity by authoring novels in multiple genres. Whether it was crime-noir, military-fiction or a Gothic-romance, Daniels was considered a good - never great - always consistent author.

Perhaps his most widely known paperback work is his Man from A.P.E. spy series of the 1960s. Now, before you think this is a collection of theories and essays on evolution (man from ape, get it?), remember the time frame. By the 1960s, Ian Fleming's James Bond character had become marketing gold. Every publisher and author was cashing checks from the creation of Bond spy-clones. Norman Daniels was no different. He authored eight installments of his espionage series from 1964-1971.  My first experience with the Man from A.P.E. books is the debut, Overkill, published in 1964 by Pyramid.

In Overkill, readers are told that A.P.E. stands for American Policy Executive, a clandestine agency of the U.S. government relatively unknown to America's other intel agencies. The organization uses a select network of spies across the globe to fight terrorists and criminal-masterminds. Really, it's a series of "the good guy Americans fighting those Russian and Chinese baddies." The star of the series is a character named John Keith, an A.P.E. secret agent that goes by the code name Darius. In Overkill's second half, it is disclosed that Keith was a language arts major in college and is able to speak several languages fluently (suspiciously similar to Jack Higgins' spy-character Paul Chavasse from 1962). This comes in handy in negotiations with allies and criminals worldwide.

In this series debut, Keith is assigned the task of locating a missile in Albania. After talking with his Russian sources, Keith learns that years ago Russia provided the Albanians a catastrophically-dangerous medium-range missile. The Albanians hid the missile and refuse to return it to Russia. Through network chatter, Russia and the U.S. discovered that four Chinese scientists are headed to Albania to work on sanitation issues. Of course, this is really a front for China to assist Albania in assembling the missile and destroying parts of Moscow in hopes that the world will blame the U.S. Smartly, Russia has bought the cover story and are allowing the Chinese scientists to cross their country to perform their task. The idea is that the Russians can follow the scientists and discover the missile's secret location. What's Keith's role? He is to work with the Russians in fighting a common enemy.

Personally, this read like a less action-packed Nick Carter: Killmaster paperback. Daniels plays it straight and doesn't provide a funny nickname for Keith's .45. Like Carter, Keith gets laid while on assignment and generally spends most of the job just interviewing people and avoiding hot water. There are some fisticuffs, some gunfire and a compelling investigation as Keith tries to locate the important missile (it could have easily been a gemstone, a world-changing document, a defector, or a KFC recipe) that doesn't really matter in the narrative itself. The journey is important, and Daniels does a serviceable job making this as exciting as it can be. I loved the book's final pages and the inevitable showdown between Keith, his ally and the Russian agents. For that alone, Overkill is well worth the price of admission. I'd certainly read another installment. You would, too.