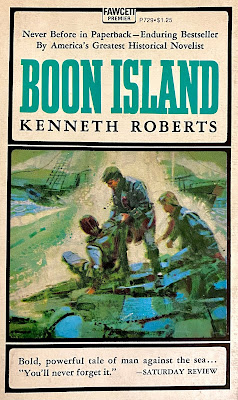 Kenneth Roberts (1885-1957) was a critically acclaimed writer for the Saturday Evening Post before switching professions to full-time novelist and author. While many of Roberts' books are collections of essays and travelogues, the Maine native authored a number of historical novels set in and around the American Northeast. My first experience with Roberts is the last historical novel he wrote, 1957's Boon Island. It was released in both a hardback edition as well as a Fawcett Gold Medal paperback.

Set in the early 1700s, the book is written in first-person as Oxford student Miles Wentworth explains how he transformed from hardworking academic scholar in London to struggling on the battered rocks of Maine's Boon Island. The first 30-pages has Miles befriending a young actor and fisherman named Neal. Miles' father is a judge and quickly Neal, and his financially burdened father Swede, become family friends to the Wentworths.

One evening Neal is attacked by a sexual predator after a performance. During the assault, Neal stabs and kills the man. In an effort to protect Neal from a murder charge, Miles and Swede hide the man's body. Miles' father proposes that the best course of action would be for Neal, Swede and Miles to join the crew of a British ship called The Nottingham under family friend Captain Dean. The ship is headed to Maine on a long exporting trip and the time away from London will insure that Miles, Neil and Swede aren't caught up in a murder investigation.

During the first few days on board the Nottingham, the heroic Captain Dean must contend with a loud-mouthed bully and his three friends. Over the journey, the tension reaches a boiling point and the inevitable physical confrontation begins. The scuffle leads to the Nottingham being shipwrecked on the icy mound of rocks called Boon Island. This is where the bulk of this survival narrative lies.

Like Robinson Crusoe or Treasure Island, Boon Island is an exciting nautical tale that transitions into a harrowing survival yarn. While the first 30-pages is extremely literary, with many discussions on English playwrights and poetry, the slow-burn was absolutely worth it. While the sea-journey consumes a few chapters, Roberts really finds his feet as the book's emphasis revolves around the shipwreck. The novel evolves into a daily diary as Miles translates the horrors of arctic temperatures, wind-swept seas, battered rocks and the consistent strife between the ship's crew.

The author's intimate, more personalized account provoked me into asking myself asking if I could survive the same horrifying events that these men endure. It would take a lot of strength and willpower. Thankfully, Captain Dean steals the show and is the essential “white-hat hero” who fits perfectly into the men's action-adventure formula. With his rugged fortitude, combined with Miles' loss of innocence, the book is a showcase of different human behaviors and perspectives under the harshest conditions. Beyond the human suffering, the book's most amazing strength is that it is a real-life testimony to the events that actually happened to these men. As a historical tale, Roberts bases his fiction on fact. That makes the last few pages a rewarding ending as we learn about the real-life characters and what became of their life experiences after Boon Island.

If you love survival stories, nautical adventures or even novels dedicated to the human spirit, Boon Island is a sure-fire winner. Despite the terrible tragedy, Roberts conveys so much excitement and anticipation into his calculated narrative. This is just a literary classic and one that makes me want to track down more of the author's work.