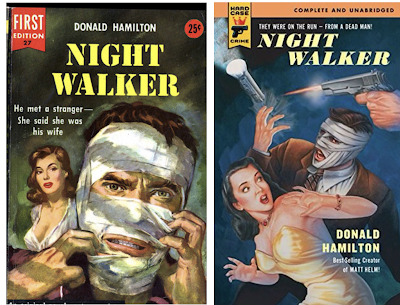 Donald Hamilton hit the jackpot in 1960 with his Matt Helm series of spy-adventure novels. Before that, he churned out a respectable library of stand-alone westerns, mysteries, and thrillers, including Night Walker from 1954. The novel was reprinted by Hard Case Crime in 2006 and remains in print today.

The paperback opens with U.S. Navy Reserve Lieutenant Dave Young hitchhiking his way to Norfolk, Virginia to report for duty. A stranger named Larry Wilson gives Dave a ride and during the trip, Larry knocks Dave unconscious with a tire iron. Dave awakens in a hospital bed with his head wrapped in bandages. The nurses are under the impression that Dave is actually Larry and claim that he was in a car accident alone. It quickly becomes clear that Larry staged the accident with the intent of switching clothing and identities with Dave. Moreover, the car containing unconscious Dave was on fire and almost exploded. Bottom line: Dave was never supposed to wake up in the hospital or at all.

While still sedated, Dave is discharged from the hospital with his face wrapped in bandages and sent home with Larry’s estranged wife, Elizabeth. She seems to have an understanding about what’s just happened and admits to Dave that this is her first kidnapping. I won’t spoil the hidden agenda here that has swept poor Dave into all this intrigue, but it’s compelling as hell. This is one of those novels - like Hamilton’s Line of Fire - that is filled with revelations as the story unfolds. Dave finds himself enmeshed in the the type of impossible quandary that Alfred Hitchcock would have loved.

Dave’s core dilemma is this: Larry Wilson is a pillar in the community. Who would believe that Larry would have staged an unprovoked attack on Dave, a stranger he picked up on the road? What would the police think if told this story by a man wearing Larry’s clothing and wristwatch? Dave figures correctly that - despite having done nothing wrong - the unlikely situation makes him look guilty of something, including desertion from the Navy. Meanwhile, where’s the real Larry?

Beyond that, there’s not much else I want to tell you about Night Walker - other than you should get a copy and read it ASAP. It’s a fun thrill ride of changing loyalties with tons of plot twists along the way. It’s the thinking man’s suspense novel you deserve. Fans of his work will recognize Dave’s cool-under-pressure commitment to logic and reason as Hamilton’s early attempt at finding the voice he later used for the Matt Helm books.

Hard Case Crime was smart to reprint Night Walker. Some other enterprising reprint house should take the initiative and get Hamilton’s other stand-alone books back in print. The guy was a national treasure and deserves to be remembered. Recommended.