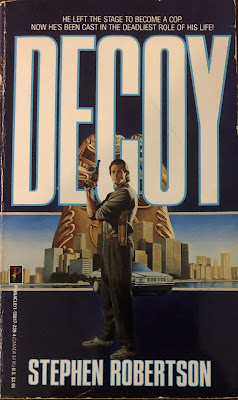 Beginning in 1989, veteran mystery and horror writer Robert W. Walker used the pseudonym Stephen Robertson for the four-book Decoy series of action-crime paperbacks released by Pinnacle Books. The novels are police thrillers about an actor turned Chicago undercover cop solving violent sex murders while dealing with his own personal demons. The author has re-released the series under his own name while re-titling the first installment as Hunting Lure.

Ryne Lanark is a Chicago cop with a hidden agenda. Before joining the force, he was an acclaimed actor until his family was slaughtered by street punks during a New Years Eve thrill-kill session. The murderers were never caught, and Ryne made revenge his life’s mission. Rather than going full-on vigilante, Ryne joined the police and worked his way up to Lieutenant where he regularly goes undercover as a “decoy” to catch and abuse violent criminals.

Ryne doesn’t play well with other cops. Attempts to foist a partner upon him generally end in fistfights or worse. After being sent to Precinct 13 - the last-chance stop for screw-up cops - he is assigned his first female partner, a young looker named Shannon. Over time, the relationship takes the exact story arc you’d expect in a 1980s police procedural.

Meanwhile, the White Glove Murderer is menacing Chicago by raping, surgically disfiguring, and murdering victims. The crimes are particularly gruesome and graphic - even by fictional serial killer standards. As you’d expect, Ryne wants a piece of the investigation. Again, the case follows precisely the story arc you’d expect. It’s not bad, but it also lacks the fun, over-the-top pulpiness that Pinnacle Books delivered to readers a decade earlier.

Mostly, I liked Decoy. It was a well-crafted police procedural mystery with two interesting lead characters. Walker was a fine, if workmanlike, writer 30 years ago capable of delivering a paperback consistent with late-1980s cop-action standards. If that sounds like your thing, you’ll dig this book. I’m probably more at home in the world of 1950s and 1960s crime fiction, but I enjoyed this detour to 1989 well enough. Recommended.