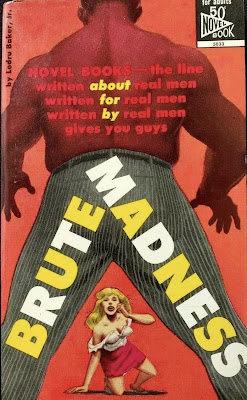 Ledru Shoopman Baker Jr. (1919-1967) was born in Kansas and died in Los Angeles at age 48. He was a painter, novelist and WW2 vet who authored two successful Fawcett Gold Medal novels in 1951 and 1952 as well as an espionage novel called Brute Madness released by low-end sleaze publisher Novel Books in 1961. Fortunately, the paperback has been rescued from the dustbin of history by reprint house Cutting Edge Books.

The paperback opens with out narrator, Mark “Mitch” Mitchell, on trial for stealing a classified technical report on atomic guided missile technology from his employer at the U.S. Atomic Energy Commission. Flashbacks from the trial tell the backstory of how the patriotic young scientist who worked on the Manhattan Project suddenly finds himself on trial for treason.

Three weeks after meeting, Mitch and Marie are engaged to be married. The internal security people at the Atomic Energy Commission are skeptical of Marie from the beginning. Why can’t they find anything about her past? It’s like she appeared out of nowhere. The marriage moves forward over the protestations of the agency cops.

You don’t have to be a genius to draw a straight line between the opening courtroom scene with Mitch on trial for mishandling classified materials and the flashback involving his suspicious wife who materialized into his life from nowhere. Is it possible that Marie duped Mitch and made off with the secret missile plans?

The trajectory of the legal case comprising the first quarter of the book was nonsensical and made me wonder if the author ever met an attorney. However, if you’re able to suspend your disbelief, there’s a great spy thriller inside the pages of this thin paperback with delightful and unexpected twists and turns around every corner. The paperback’s main villain is a corpulent giant called The Dutchman, who is one of the finest villains I have ever encountered in a vintage paperback. Both the dialogue and action scenes are also particularly good throughout the novel.

Brute Madness is a remarkably good time. It probably won’t be your favorite book ever, but it’s way better than it had to be to satisfy both 1961 readers and those rediscovering the paperback 60 years later. Recommended.

“The Queens Bedroom” - Novelette from Tales of the Frightened magazine (August 1957). The publication was edited by Lyle Kenyon Engel and illustrated by Rudy Nappi.

Posted by Paperback Warrior at 6:05 AM