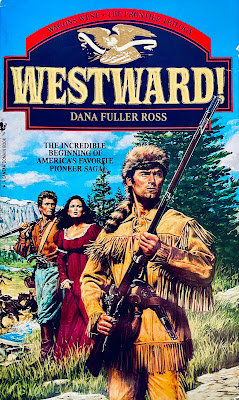 Beginning in 1978, author Noel B. Gerson (1914-1988) penned the first of book of the immensely popular western series Wagons West. Set in the early to mid-1800s, the Wagons West series focuses on the fictional Holt family of American frontiersmen. The main character is Michael “Whip” Holt, a wagonmaster who faces danger and seduction in each book's adventure. The plots were created by Lyle Kenyon Engel and published under the house name of Dana Fuller Ross.

Beginning in 1989, another series was introduced under the title The Holts, an American Dynasty. Authored by James Reasoner (Abilene, Stagecoach Station) also under the name Dana Fuller Ross, the series ran for 10 installments and focuses on Whip Holt's sons in the late 1800s. That brings us full-circle to the subject at hand, an exciting Wagons West prequel trilogy titled Wagons West: The Frontier Trilogy.

This three-book series of early American frontier action consists of Westward! (1992), Expedition (1993) and Outpost (1993). James Reasoner wrote the series under the familiar house name of Dana Fuller Ross and Lyle Kenyon Engel's Book Creations, Inc. produced it. Similar to what Louis L'Amour did with his popular Sacketts series, Engel came up with the idea of an “origin” story introducing the Holt family in the early 1800s (prior to Whip Holt and son Toby). I had never read a Wagons West book and found this prequel debut, Westward!, to be the perfect stepping stone into this long and successful American saga.

In Westward!, brothers Jeff and Clay Holt are introduced to readers in the year of 1805. The book's opening pages explains that young Clay is part of the Corps of Discovery, a group of burly adventurers who made up the assorted crew of Lewis and Clark's expedition into America's vastly unexplored far west. Through early action, Clay fights a duo of Native Americans while conversing with the real-life historical figure Sacajawea. In this early exchange, readers learn that Clay is quite the frontiersman and very daft with his flintlock musket, Cheney pistols, hunting knife and tomahawk. Right away, I knew I was in for a real treat.

Westward! proves to be an epic saga of both Clay's struggles in the wild as well as his brother Jeff's farming life in the fertile Ohio Valley. At a whopping 477-pages, Reasoner finds plenty of room to weave in a number of intricate story-lines. The first is Clay's acclimation back into civilization after two years in the rugged wilderness. Second is the book's middle chapters that expand upon a deadly and violent feud between the Holt and Garwood families. Like the famed Hatfields and McCoys, both of these families come to blows with the Garwood brother Zack and Pete proving to be a dangerous threat to Clay and Jeff's parents and siblings. The novel's third act places both brothers into the wild, untamed land of the west as they fight rival trappers, Native Americans and the vengeful Garwoods.

I would place Westward! alongside classic frontier westerns like Zane Grey's Spirit of the Border trilogy and Louis L'Amour's Jubal Sackett and To the Far Blue Mountains. Granted that's a huge accolade, but it is absolutely a valid comparison. Reasoner's writing is just so good and brings to life not only this early Holt generation, but also America's beautiful history. I've always been fascinated by the early 1800s exploration of North America and the Ohio River Valley and Reasoner seems to be writing just for me. He speaks to me so well with these adventures and his descriptions of the rugged, majestic beauty of America's early frontier. If you love this style of western storytelling, Westward! is a must read. I've already purchased the rest of this trilogy as well as the first book of Reasoner's second and last Holt follow-up trilogy, Wagons West: The Empire Trilogy.

I had the pleasure of talking with James Reasoner about this novel and series. He explained that he isn't sure who came up with the idea of the Wagons West prequels, whether it was him or his editor at Book Creations Inc. He told me that his wife half-jokingly said, "What they don't tell you is that it was Lewis and Clark...and Holt." He said everything else just sprang from that. He believes Westward! is not only the longest book he has written but also his best-selling novel. He went on to add that a third trilogy was in the planning that would have been titled Wagons West: The Rogue Trilogy but at the last minute, Bantam changed their mind.