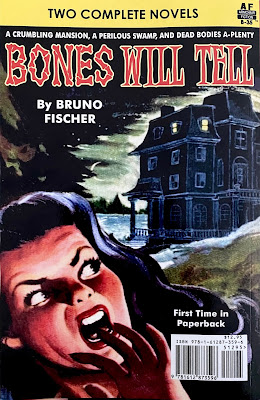 Before transitioning into full-length paperback novels in the 1950s, Bruno Fischer wrote for the pulps. Always a workhorse, the author contributed to a number of dime-magazines and pulps in the 1930s and 1940s. In 2017, Oregon publishing house Armchair Fiction chose to reprint Fischer's novella Bones Will Tell. The story was first published in the February 1945 edition of Mammoth Mystery. As a shorter work, the publisher packaged it as a two-in-one with Day Keene's 1959 full-length paperback Dead in Bed.

Bones Will Tell is a good example of the shudder-pulp writing style of the early 20th Century. Fischer cut his teeth on this sub-genre and masterfully weaves together elements of horror, mystery and intrigue. The story is about two 12-year old kids who dare to climb over the wall bordering what many consider to be the town's “old dark house.” Rumors are abound that the owner herself is a mysterious widow who lost her husband decades ago. Whether he is dead, missing or still alive somewhere in the house enhances the lore of the property. With this seemingly haunted house bordering a dreary swamp, the author's imagination runs wild when the two kids discover a dead body laying in a damp flower bed.

Like any old-fashioned horror tale, the kids report their findings to the police who fail to find any evidence of a corpse. When the kids' testimony becomes questioned, the criticism shifts to the kids' unwarranted trespassing. In order to prove their innocence, the kids jump over the wall again the next night. This second-half of the story escalates the narrative into a more frightful, murder mystery as the body count increases.

In today's more desensitized views of horror, homicide and grizzly details, Bones Will Tell will pale in comparison. In many ways this is like a Scooby-Doo or Hardy Boys installment where the murderer can be anyone under the sheet. The pretense that the old house is haunted is quickly dismissed as the true culprits are revealed. Anyone familiar with the formula won't find many surprises here. It's an early work by Fischer and his writing style reads like a juvenile mystery. It's hard to judge his true talents based on these types of stories, but there's enough meat on the bone to witness his early potential. As a bonus to Keene's Dead in Bed, this is a winning combination warranting the $12.95 sticker price.