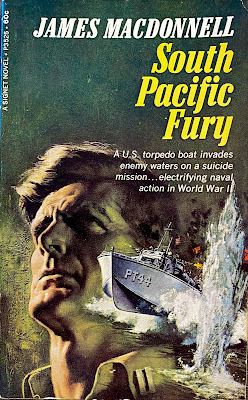 Australian born novelist James Edmond Macdonnell (1917-2002) utilized pseudonyms including Kerry Mitchell, Michael Owen and variations of his own name to construct a robust catalog of literary work. Fans of spy-fiction may recognize the name James Dark, a pseudonym that Macdonnell used to write the 14-book Mark Hood series from 1965-1970. My first experience with Macdonnell is South Pacific Fury, one of nearly 150 naval mens-action adventure novels authored by Macdonnell for Australian publisher Horwitz (the same international publisher that printed Carter Brown). South Pacific Fury was originally published by Horwitz in 1968 and subsequently published in the US by Signet with cover art featuring model Steve Holland (Doc Savage).

Like the name suggests, the novel's premise is about a U.S. PT44 torpedo boat in action in World War 2's Pacific Theater. The main character is Captain Walt Kenyon, an admirable hero who commands his small crew to perform at their peak despite the overwhelming odds. In the book's exciting opening pages, Kenyon's crew shoot down a Japanese “Zeke”, a common Japanese fighter craft formally called the A6M Zero. After discussing the plane's placement and mission, the crew then intercepts a Japanese Destroyer in a harrowing firefight.

While these early hit-and-run exercises are a pleasurable reading experience, South Pacific Fury thankfully settles into a central plot. A Coastwatcher named Cook has become trapped on Golo Island, now completely occupied by enemy forces. After months of relaying strategic codes and instructions, the Navy doesn't want to abandon him. Orders are given to Kenyon's crew to circumvent a large Japanese fleet in an effort to successfully rescue Cook from behind enemy lines.

In some ways this reminded me of the excellent novel Skylark Mission, written by Marvin Albert under the British-sounding pseudonym Ian MacAlister. Like that adventure, the exploits of Cook surviving on the island and avoiding detection are carefully inserted into alternating chapters that really helped me escape the small confines of Kenyon's boat. This novel of “land and sea” ratcheted up the suspense and action through the use of both perspectives.

South Pacific Fury is an outstanding work of war-fiction and, to the detriment of my wallet, has led me down the rabbit hole of Macdonnell's body of work. Highly recommended!

Email ThisBlogThis!Share to TwitterShare to FacebookShare to Pinterest
Labels: WW2