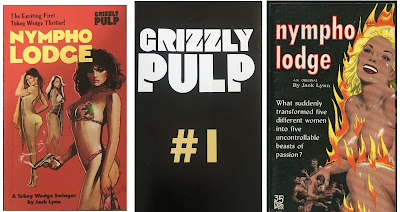 The Tokey Wedge paperbacks are light-hearted - yet hardboiled - private detective stories that don’t take themselves too seriously. Tokey himself is 5’6” and 140 pounds. His narration and the plotting reminds me of Richard Prather’s Shell Scott books. In this case, Tokey is hired as a bodyguard for a wealthy woman named Janice going through an ugly divorce and receiving cryptic threatening letters. The splitting couple both live at a resort they co-own called The Wagon Wheel. Tokey moves into the resort, so he can be closer to his client and determine who, if anyone, is trying to kill her.

At the lodge, we quickly meet the Nymphos. To be fair, it not clear that any of them have been clinically diagnosed with nymphomania, but every woman Tokey encounters at the lodge is beautiful, stacked, and hot to trot. By 2020 standards, the novel has some retrograde attitudes toward women as sex objects. However, the book is pure escapist fiction from 1959, so no actual women were objectified in it’s creation. You should know by now if this is your thing or not. The paperback is sexier than most 1959 crime novels but nowhere close to graphic or explicit by today’s standards.

Amid the flirty hijinks and sexual innuendos, there is a decent mystery to be solved at Nympho Lodge, and Tokey proves himself to be a competent, funny, and tough private detective. At times, it felt like a dirty Agatha Christie book with a finite number of people in a lodge getting killed off one by one while our intrepid investigator gets laid and solves the mystery. For comparison purposes, I enjoyed spending 174 big-font pages with Tokey Wedge far more than I’ve ever liked a Shell Scott paperback. Nympho Lodge isn’t a mystery masterpiece, but it’s definitely a lot of sexy fun.

Grizzly Pulp did a marvelous job packaging the physical product of this paperback. The pulp paper is soft and readable. The novel comes with a removable black cover masking the lusty sleaze art, so you can read on a crowded city bus without inviting the side-eye from squares. My only criticism is that there were lots of line-break errors in the text and several other typos. It was nothing that stopped me from enjoying the story, but the Grizzly Pulp proofreader shouldn’t rely on optical character recognition programs to do all the work.

Mostly, I’m thrilled that an enterprising, grassroots publisher has brought Tokey Wedge back to life. This is a fun series that deserves a second chance at building a readership. Recommended.

Email ThisBlogThis!Share to TwitterShare to FacebookShare to Pinterest
Labels: Sexy