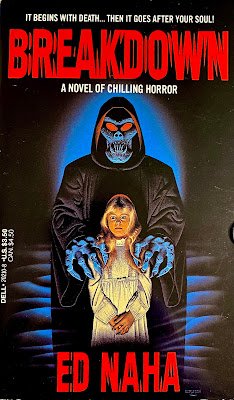 Author Ed Naha, born in 1950, wrote for magazines like Rolling Stone, Playboy, Heavy Metal, Fangoria and The Twilight Zone. Along with John Shirley, Naha contributed to the 1980's post-apocalyptic series Traveler as well as penning novelizations for films including Robocop, Dead-Bang and Ghostbusters II. With over twenty-five novels on the menu, I ventured into the horror realm with Naha's 1988 Dell paperback Breakdown.

The book introduces readers to Jeff McQueen, a best-selling horror author who writes a series of heroic werewolf stories. In the opening pages, McQueen experiences a fiery car wreck in California that results in the death of his young son. Later, McQueen's literary agent Oliver reveals to him that his last two mystery novels didn't sell well and the publisher wants him to return to his horror roots. McQueen, mourning with his wife and young daughter, understands that he's in debt to the publisher and needs to rebound from the tragedy quickly. To fast-track the next novel's conception, Oliver books the McQueen family in a century old Gothic mansion called Elmwood Estate in rural Massachusetts.

Once the McQueen family settles into the new locale, Jeff begins to experience childish laughter in the hallways, bizarre hallucinations and a multitude of visions stemming from his son's death. In the estate's sprawling garden lies a number of statues and monuments that his daughter “befriends”, only Jeff fears that these monuments are sinister in nature. In the small town, the McQueens discover that there are no children present. All of these eerie elements combine to make Naha's Breakdown a haunted house thriller with a core mystery – what's the secret behind Elmwood Estate?

At  just over 200-pages, Breakdown is a quick page-turner that falls into the cozy “move into the haunted house in New England” sub-genre. While not particularly violent or gory, the book has a thick and foreboding atmosphere that suggests death is merely a chapter away. As the book progresses, Jeff's descent into madness is parallel to his heavy alcohol abuse. This plays havoc for the skeptics who ponder whether Jeff is really seeing things or is it just the booze?

As a serviceable haunted house entry, Breakdown is sure to please. I found some of the aspects scary, but overall I was more enamored with Jeff's relationship with his young daughter and the fight for his sanity and soul. Overall, this is an easy read with plenty of reward. If you can locate an affordable copy, don't hesitate to loosen the purse strings. It's a smart purchase.