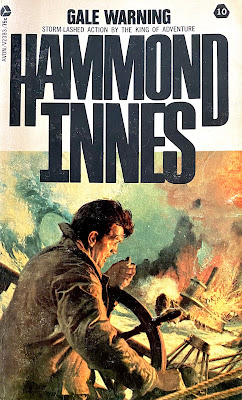 Ralph Hammond Innes (1913-1998) is considered one of the founders of the men's action-adventure genre. As a pioneer, Innes began constructing high-adventure yarns as early as 1937, often setting his novels in exotic and breathtaking locales to create harsh conditions for his heroes to overcome. After reading my first Innes novel, 1947's The Lonely Skier (aka Fire in the Snow), I was underwhelmed by the author's slower pace and long, drawn out dialogue sequences. Refusing to accept defeat, I attempted another of the author's works with 1948's Maddon's Rock, also known as Gale Warning in the US.

This suspenseful adventure is set during the last days of World War II. The novel introduces readers to a British Corporal named J.L. Varny and his brother-in-arms Bert Cook. In the opening chapter, these two soldiers are within a small company of troops in Murmansk, Russia awaiting departure on the Queen Mary. However, their arrival to the ship's departure is late so they are ordered to join the crew of a British freighter called the Trikkala. On board, the troops are assigned the tedious task of guarding a small cargo of crates day and night as the ship journeys through arctic cold fronts on its journey back to England.

Immediately Varny senses that something is strange about the ship's crew. Their captain is a notorious trader who’s experienced a number of mysterious casualties to his crew. The orders suggest Varny and his men to simply stay out of the way. But for what purpose? As the weather becomes more frigid, the boat and its crew are attacked by a German U-Boat. Within minutes, Varny suspects that something is amiss about the attack. Further, upon inspecting the lifeboats he finds that someone on board has disabled the boat's inner planking. Is this a heist, a surrender or simply the war's stress on Varny's exhausted mind? Thankfully, the author uses these options to propel the book's thrilling narrative.

At 220 small-font pages, Maddon's Rock resembles a more dynamic, epic-styled journey. The plot is filled with excitement as Innes injects war, nautical adventure, island peril and even prison into the exciting plot. Unlike The Lonely Skier's heavy dialogue, Gale Warning is brimming with suspense and tension that thrusts the reader into cold and exotic regions. This is truly a masterpiece of adventure storytelling and one that proves to me that Hammond Innes was truly impressive. With over 30 novels to his credit, there's sure to be a clunker or two. Maddon's Rock is absolutely not one of those. If you are new to this author, I highly recommend starting with this one. It's the perfect kick-starter into what surely will be a pleasurable reading journey through the author's robust catalog.