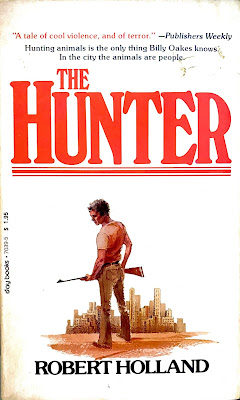 With books like Death Wish (1972) and the Executioner debut War Against the Mafia (1969), the vigilante brand of storytelling was highly marketable in the 1970s and 1980s. Pop-culture was ablaze with films like Taxi Driver (1974) showcasing average men pushed to the brink of sanity by heinous and traumatic events. As a reader and fan of this genre, I'm always searching for more vigilante stories from the 1970s. That's why I was delighted to find a paperback called The Hunter written by an unknown author to me named Robert Holland. It was originally published as a hardcover in 1971 by Stein and Day and as a paperback by Day Books in 1981. The cover depicting a man holding a rifle and staring at a city just screams “vigilante saga” to me. Further support is the marketing tag: “Hunting animals is the only thing Billy Oakes knows. In the city the animals are people.” Needless to say, I quickly threw my quarters at the store clerk and ran to the car with my new purchase.

The book begins by introducing readers to young Billy Oakes. He's a country boy living in the hills of northwestern Georgia. When he isn't hunting animals for food, he's maintaining an incestuous relationship with his sister. Billy's mother is dead and his father is in the pen for murder. Other than his intimate relationship with sis, Billy's only other relative is a cousin named Daniel. Years ago, Daniel witnessed Billy brutally murder someone. Fearing for his own life, Daniel and his wife Sarah fled to Lakeport, NY. After years of living in rural Georgia, the maniacal Billy hops a freight train in hopes of forming a domestic new life in New York with his cousin.

Holland is a serviceable writer, but he forces readers into a killer's deranged mind. Aside from saying just a few words, Billy remains a silent, savage animal that eats raw meat and lives in the dark urban tunnels beneath the city's bridges. On the toughest streets in town, Billy embarks on a bloody rampage where he slashes randomly chosen victims with a razor sharp knife. Lakeport's law-enforcement become baffled by the spontaneous killings, but Daniel recognizes Billy’s signature style and the condition he leaves the bodies in. Fearing that Billy has discovered where he and Sarah live, Daniel reports his suspicions to the police only to be turned away by what they feel is a silly speculation. As the book builds to a finale, Billy and Sarah prepare to confront Billy alone...once and for all.

The Hunter certainly had the potential to be great. However, the story-line is just so basic with very little development. I feel that the author really lost his way in leading readers to some sort of emotional connection between Billy and Daniel. Aside from a single-paragraph flashback, there's very little connecting these two men. With Holland leaning heavily on Billy's murderous path to Daniel, the story could have been enhanced with a more charismatic bad guy. Billy is such a primal killer that there's just not enough dialogue or sensible thinking for readers to really understand the character.

My biggest disappointment with Holland's story is that a much better concept is served to readers as a minor side-story. Daniel has a black neighbor named A.L. with this really awesome backstory of being an undefeated boxer who was framed and later imprisoned. Upon his release, A.L. begins saving his money to invest in the city's crumbling real-estate. His idea of flipping houses is a real positive take on urban development and overcoming adversity and racism. When the mostly-white police force tries to pin the killings on A.L., he fights back and becomes a local hero for the black community. This is the story the author should have been telling us all along. It deserved to be a full-length novel. Instead, Holland settled on this weird “killer stalking the city” formula that just never became exciting. Don't be fooled by this paperback's vigilante cover art. The Hunter came up empty handed.

If you feel like you still want to own this book, buy a copy of it HERE