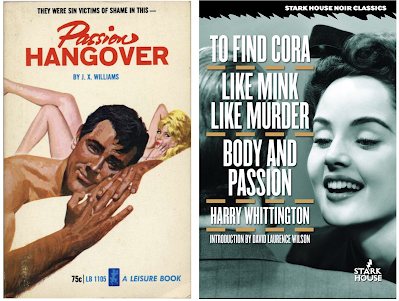 Like Mink, Like Murder was a 1957 Harry Whittington novel that only received a French-translated printing (as T’as Des Visions!) after failing to find a U.S. publisher. The book was later heavily-adapted into a 1965 sleaze paperback called Passion Hangover. Whittington’s original manuscript has been lost to the ages, but literary scholar David Laurence Wilson reverse-engineered the sleaze paperback into something resembling Whittington’s original vision for a Stark House re-release.

The narrator of Like Mink, Like Murder is a milkman named Sam Baynard in the town of Dexter City (Population: 100,000). Sam is an ex-con whose past catches up with him when a hot babe named Elva tracks him down in Dexter City. She and Sam were crew members working for a gangster named Kohzak until Sam got nabbed robbing a jewelry store. Sam kept his mouth shut, served his prison time and then landed a straight job delivering milk to squares.

Sam used to be in love with Elva, who’s the main squeeze of Kohzak the gangster. For his part, Sam blames both Elva and Kohzak for his incarceration and just wants to be a milkman and assimilate into legit society. Unfortunately, Kohzak insists on Sam’s help to pull off a payroll heist, and he’s not the kind of mobster who takes no for an answer. Will Sam succumb to the pressure and return to a life of crime? Will he finally get into Elva’s britches? What about his promising future in the fast-growing field of dairy delivery? These are the dilemmas Sam and the reader navigate over the course of this 35,000 word paperback.

The writing in Like Mink, Like Murder was a bit clunky in the opening chapter, but things smooth out considerably thereafter and begin to feel like a normal Whittington potboiler. There’s a real emotional core at the center of the novel as Sam is torn between the straight life of a milkman and the potentially lucrative life of a stick-up man. Whittington did a great job ratcheting up that tension throughout the short paperback.

Where does Like Mink, Like Murder rank in the library of Whittington’s work? I’d say it’s a solidly better-than-average Whittington novel - likely due to the edits made by Wilson 50 years after the paperback’s original conception. Whoever gets the credit, if you dig a tightly-wound crime noir suspense novel, you’re sure to enjoy this one quite a bit. It’s part of a three-pack of Whittington’s lost works released by Stark House and a great value for your money. Highly recommended.