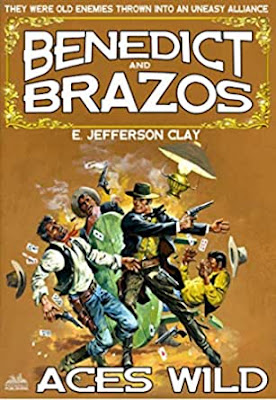 Originally born in New South Wales, author Paul Wheelahan (1930-2018) began his career writing and illustrating comics like Captain Power, Sheena, Davy Crockett – Frontier Scout and The Panther.  By the 1960s, Australian comic publishing declined and Wheelahan joined Cleveland Publishing to begin writing western novels. From 1963 until his death, Wheelahan authored more than 800 novels using pseudonyms including Brett McKinley, Emerson Dodge and Ryan Brodie. My first experience with Wheelahan is his western series Benedict and Brazos. It was written under the pseudonym E. Jefferson Clay and ran 27 total installments throughout the 1980s. Since then, the series has partially been reprinted as ebooks by Piccadilly and glossy trade paperbacks through Bold Venture Press. The series debut, Aces Wild, is my first experience with Paul Wheelahan's work.

In the debut's third chapter, the reader learns that Duke Benedict was a Union Captain of Vermont's 10th Militia. Across Georgia's Pea Ridge was the enemy, Confederate Sergeant Hank Brazos. The Confederate’s mission was to escort a wagon containing $200K in gold into Mexico, a valuable treasury that was to eventually start a second Confederacy. At Pea Ridge, Brazos and Benedict face off only to find that they quickly become allies in fighting a bandit named Bo Rangle, the leader of a guerilla force calling itself Rangle's Raiders. After Rangle wins the fight, and steals the gold, Brazos and Benedict shake hands and go their separate ways.

After the war, Benedict becomes a sharp-dressed card sharp and womanizer. Brazos remains a burly brawler who saddle tramps from town to town. As destiny sees fit, the two run into each other in a hot-handed gambling town called Daybreak.

Wheelahan provides a number of narratives that entwine and capture the reader's attention. The first is that Bo Rangle has used some of the stolen gold to set-up a whorehouse governed by Rangle's lady-of-the-night Bellie. The second has a Christian woman's auxiliary hoping to eliminate Rangle's brothel through peaceful and political protesting. Third, a bounty hunter named Surprising Smith is leading a town posse after a trio of outlaws led by a vile villain named Sprod. With this crowded narrative, where do Benedict and Brazos fit?

Benedict is secretly searching for Rangle's gold while laying down some heavy swagger and charm with Rangle's flirtatious Bellie and Smith's luscious girlfriend. Brazos brawls his way through a few bar-room escapades and eventually meets up with Benedict and learns about his plan to find and recover the gold. Striking up a deal – sort of – the two work together to fight the outlaws and recover the gold.

The series' two main characters aren't necessarily the stars of the show. Often I found myself wondering just when the deadly duo were going to slap leather and gun down the baddies. In a rather abstract approach, Wheelahan prolongs the dialogue and set-up and allows some of the other action to play out in separate narratives. Eventually the duo gain some footing that culminates into the proverbial showdown, but it takes a little while to get there. It's clear that the author had plenty of irons in the fire with a busy narrative that has a little something for everyone. The through story originates with the missing gold and Benedict and Brazos deciding to ride off into the next books searching for Rangle and the treasure. That's the series premise and it's probably enough for readers to stick around to learn more.