The Protectors #01 - The Petrova Twist 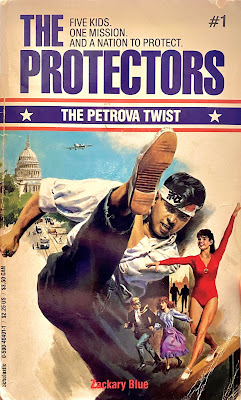 Sometimes referred to as the “Stephen King” of young adult fiction, Robert Lawrence Stine (R.L. Stine) is a true literary icon. He's written a number of young adult horror series titles like Goosebumps, Rotten School, The Nightmare Room, Fear Street, Mostly Ghostly as well as dozens of stand-alone titles. As Jovial Bob Stine, the author has released a slew of humorous joke books. In addition to his own creations, Stine has contributed series entries for G.I. Joe, Man-Thing, Masters of the Universe and the movie novelizations for Ghostbusters II, Spaceballs and Big Top Pee-Wee. How does any of this interest Men's Action-Adventure fans?

In February 1987, Scholastic published the first of a two book series called The Protectors. It was titled The Petrova Twist and was written by Stine under the pseudonym Zachary Blue. The idea was to cash in on the men's team-based commando popularity of the time period. Able Team, Phoenix Force, S.O.B. and other long-running series titles had tremendous marketing success in the 1980s. Using that idea, complete with similarly themed cover art, Stine introduced a team of high-school kids who are employed by the U.S. government to fight international crime.

In the book's opening chapters, each of these high-school students receive a special invitation from The White House to attend a special awards ceremony celebrating their tremendous academic success. Oddly, they can't bring any adults, and it's a solo trip for each of them (the 80s were so safe).

Once they arrive in Washington D.C., the kids meet each other in a strange warehouse where they are introduced to Tiger Browne. He informs the kids that they have been carefully selected to serve in a government agency called CENTRAL. This agency will combat international crime and assist other government agencies on special assignments. Without any training, the team is assigned the task of helping a Soviet gymnast named Elena Petrova defect to the U.S. Will they succeed?

Mostly this book is fairly lousy. At almost 200-pages, the entire narrative takes place at an auditorium or the kids' hotel. This tight location setting left me feeling confined and limited in my imagination. Granted this is a young adult novel, I still found the action to be very minimal compared to other kids' fiction. Essentially, the team has no experience, receives no training or guidance and botches the whole thing up from start to finish. These types of high-octane action novels aren't meant to be plausible and The Protectors proclaims that limitation with an astounding voice. The entire plot is just senseless. There's a swerve ending that clears up most of my confusion regarding the narrative and story-line but I was still really disappointed.

The last few pages of this book sets up the idea that CENTRAL becomes the elite PROTECTORS and must fight a terrorist group called CONQUEST in the next book, The Jet Fighter Trap. I'll probably still read it because I'm a completest, but you can do so much better with this genre.