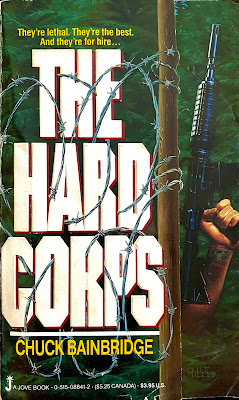 After their re-branding from Pyramid, the Jove publishing house experienced a retail bonanza in the mid-1980s. At the height of post-Vietnam War action films like Missing in Action and Platoon, Jove launched a plethora of hard-hitting, hi-octane team-commando series titles like M.I.A. Hunter and The Guardians as well as the novelizations for Rambo II and III. Another series title that Jove introduced to the market was The Hard Corps. It ran eight total installments from 1986 through 1989 and was written under the house name of Chuck Bainbridge. In reality, the series was mostly written by William Fieldhouse (M.I.A. Hunter) and Chris Lowder (Deathlands #01). Fieldhouse's efforts are mostly the early volumes with Lowder writing the series' later installments. The eponymous debut, The Hard Corps, is my first experience with the series.

At 320-pages, this paperback is loaded from cover to cover with action. The book begins with The Hard Corps team liberating a Mexican couple from a terrorist group for a million bucks. This early onslaught showcases the five-man team in their element – violently blowing away the bad guys. After the mission, readers are introduced to the team and the series premise.

The Hard Corps is led by William O' Neal, a former Green Beret captain who excels in all combat situations. John McShayne is the team's primary caregiver, a Korean War vet that handles inventory, cooking and some accounting. Joe Fanelli is the obligatory explosives guy. James Wentworth is O'Neal's second in command and a samurai sword expert. Rounding out the bunch is Steve Caine, my personal favorite. Caine is sort of a loner, a survivalist who is comfortable in the wilderness, an expert in blades and designs various traps to ensnare and kill enemies.

These five guys are all Vietnam vets who served together as a fighting force in Southeast Asia. Now they are mercenaries with a unique relationship with the U.S. government. The C.I.A. and F.B.I. promise to leave The Hard Corps alone as long as they share their valuable intel and also agree to do a few odd jobs for the U.S. brass every so often. The team's C.I.A. liaison is a guy nicknamed Saintly.

The Hard Corps are probably the most organized and efficient team in action-adventure literature. Their compound is located in a rural stretch of the Pacific Northwest. It's here that they live, train, park their choppers and do all of the mission planning. As such, it's unusual when a small team of Vietnamese rebels land a chopper at the team's headquarters.

Unbeknownst to O'Neal and company, Saintly has instructed these rebels to find safety with the Hard Corps. The reasoning behind the safekeeping is that these rebels are being hunted by almost 100 Vietnamese government operatives. Before you groan and ask how this many communist soldiers are in the U.S. undetected, let me stop you. You see the Soviet Union's K.G.B. operatives have secret locations along the Pacific coast. It's easy for the K.G.B. to assist in getting these Vietnamese operatives through the U.S.'s southern border undetected. With this many assassins hunting the freedom fighters, the Hard Corps quickly realize that their unwanted guests have brought plenty of baggage. Their entire compound is surrounded and the rebels are their target.

Fieldhouse uses this double-sized debut to not only tell a story but to also dedicate whole chapters to each team member. In long backstories, Fieldhouse showcases each member's childhood and their natural evolution from the streets to the jungle. Some stories were captivating while others were a bit of a snooze. The book's central focus is simply The Hard Corps holding off waves of enemy forces with high-capacity guns and Earth-quaking explosives. The author's descriptions of guns and other weaponry was thankfully held to a minimum but the violence factor was amped pretty high. This series isn't for the squeamish.

At 320-pages, I mostly enjoyed the book but honestly skipped through some of the biographical sections. With so many of these titles, and so little time, I wanted the meat and potatoes action more than an emotional war story about brothers in arms. Regardless, The Hard Corps is one of the better 80s team-commando series titles and remains fairly respected decades later. If you like Phoenix Force, Eagle Force and S.O.B.s, you'll be at home with The Hard Corps.