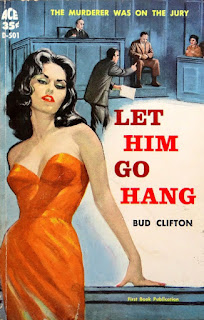 In 1963, Time magazine listed David Stacton as one of “10 most promising writers in recent years.” Stacton, who also utilized the pseudonyms Bud Clifton, Carson Boyd and David West, was born Arthur Lionel Kingsley Evans and grew up in the San Francisco area. After studying at Stanford and Berkeley, Stacton launched a 15-year writing career that included 14 diverse novels of historical fiction, crime-noir and gay literature. In 2020, Cutting Edge Books began reprinting several of Stacton's “Bud Clifton” novels including Let Him Go Hang. The book was originally published in 1961 by Ace and marks my first experience with this highly-touted author.

The book is set in a secluded Arizona mountain town called Babcock. It's here that Ben Barrett inherited a small empire encompassing hotels, stores, a ranch and the lumber company. Outside of the sprawling military hospital, Barrett owns the place. But his commercial triumphs pale in comparison to his domestic livelihood. His marriage to Martha is on the rocks and his daughter Stephanie has become a rebellious delinquent. At the end of the book's opening chapter, Barrett's chaotic storm comes to an abrupt finish – Stephanie's corpse is found in a nearby lake.

Unlike a police procedural or murder investigation tale, the novel immediately introduces a confessor. A rather strange man named Charlie pleads guilty after Stephanie's purse is found by Charlie's suspicious wife. By the book's third chapter, Let Him Go Hang has developed into a tight courtroom drama as two rival attorneys compete in a spectacle of small town justice. Is Charlie just the fall guy or did he really commit the crime? Did Barrett's impending divorce have an impact? Unfortunately, Stacton devises a rather clever narrative twist that deflates the momentum of the story: Stephanie's actual killer is on the jury.

Let Him Go Hang features a narrative that is presented to readers through various perspectives. Like Bill S. Ballinger, Stacton utilizes this storytelling approach to introduce a half-dozen characters that may have some link to the murder. It's because of this approach that the story is underwhelming. Readers already know that Charlie is innocent and that the real killer is watching the trial unfold hoping to influence a guilty conviction as a juror. This isn't some grand reveal or mystery that unfolds – readers are informed early in the novel and this declaration is boldly stated on the book's original cover.

Aside from the minor story-lines that come to fruition outside the courtroom, Let Him Go Hang is a murder trial put to paper. If you enjoy judicial procedural novels, this book may entertain you. I don't particularly enjoy courtroom dramas, so the cross-examination intensity didn't have the desired effect. Your mileage may vary. At the very least, Let Him Go Hang possesses the typical mid-20th Century crime-fiction elements – love triangles, corpses, killers on the run, money and tramps – to provide a satisfactory reading experience.