Race Williams #04 - Them That Lives by Their Guns 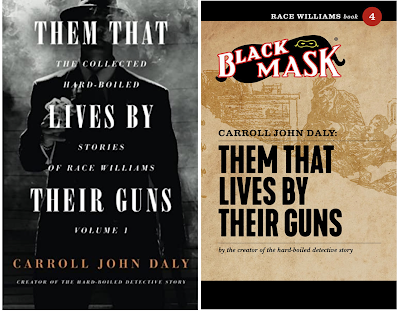 Race Williams was the first hardboiled detective to star in a successful series of stories in the pulp magazines. Thanks to some smart reprint houses and a popular paperback podcast, there has been a renewed interest in the work of series creator Carroll John Daly who died broke and unappreciated in 1958. Today we visit Race’s fourth adventure, Them That Lives by Their Guns, originally published in the August 1924 issue of Black Mask.

This time around, Race’s client is a wealthy man named P. Harrington Cardigan, and he’s hiring Race to find his missing daughter. The girl’s name is Gladys, and she moved away to California to find her fortune as a Hollywood starlet. When she failed to break into the business, dad sent her money for a ticket home to New York, but Gladys never showed. Instead, she called her father saying that she met a director who was taking her to Mexico for some filming projects.

It gets worse. Gladys met a man in Mexico and married him. The guy is a real louse: a gambler, an abuser, a killer, and a blackmailer. The husband - his name is Louis Rafaele- regularly sends Mr. Cardigan letters threatening to kill Gladys unless dad sends money to him in Mexico. Thus far, Cardigan has paid the brute. But that’s the thing about blackmailers - they never stop unless you hire a hero like Race Williams to make him stop and bring the girl home to daddy.

Race sets off via passenger train bound for the small Mexican town where Rafaele is known to be the town’s boss and the fastest gun. In the meantime there’s also a lot of skullduggery and tough-guy violence involving Race aboard the train chugging across America. Daly’s version of a 1924 Mexican border town is a lot like the settlements we see in western fiction - lawless, dangerous, and unpredictable. As the fastest gun in town, Race excels in this environment as he searches for the missing girl building toward a climactic bloodbath.

Once again, Race Williams is awesome. Them That Lives by Their Guns is an exciting and violent novella that stands the test of time. There were some convoluted plot aspects involving a Mexican bank that weren’t entirely clear, but the core of the story was Race rescuing the girl and vanquishing the villain. What’s not to enjoy about that?