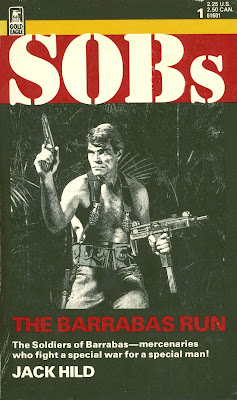 Author Jack Canon spent a majority of his action-adventure storytelling career firmly planted in the Nick Carter: Killmaster series. Canon penned over 40 novels of the series in the 1980s, but he was also contributing to a team-based combat series for Gold Eagle called S.O.B.s. The series debut, The Barrabus Run, features not only Canon but also two additional authors – David Wade (Executioner, Super Bolan) and Robin Hardy – all writing as Jack Hild. This team-commando series was published from 1983 through 1989 with a total of 33 installments. The Barrabus Run is my starting point with this beloved series.

The book's opening chapters introduces two key characters, protagonist Nile Barrabas and eventual team liaison and C.I.A. operative Walker Jessup. This early narrative explains that Barrabas was in the U.S. military from 1958 through his retirement in 1975. His career included extensive training at West Point before joining Special Warfare Training in Fort Bragg and Panama. The advancement led to his placement in a Vietnam Special Forces team. During the conflict, Barrabas received Silver Stars, a Distinguished Service Cross and the eventual Medal of Honor. Then he seemingly disappeared.

Now, Walker Jessup works for a shadowy Senator running administrative duties and delegating high-powered personnel into high-intensity situations. The Senator asks Jessup to run an operation in South Africa. There, the people of Kaluba are subjected to a puppet dictator and the U.S. wants to establish a different leader in his place – Noboctu. Only he is now being held prisoner by the puppet dictator's chief rival, a notorious terrorist named Mogabe. Mogabe wants to become the new dictator and is holding Noboctu prisoner until after Kaluba's elections are over. Follow me?

The formation of S.O.B.s (Sons of Barrabas or Soldiers of Barrabas) originates when this Senator requests that Jessup create a team of specialists who can do his international bidding. The team, described as a dirty strike-force, will perform assignments and tasks that are beneficial to America's security as well as its allies. To lead the group, Jessup picks Barrabas. The problem is that Barrabas has been off the radar performing international mercenary jobs. His most recent venture led to captivity in a Latin American prison awaiting execution. Jessup finds Barrabas there and makes him a deal. He'll spring Barrabas, ultimately saving his life, if Barrabas will come work for Jessup.

Barrabas agrees to the deal and makes arrangements to recruit ten hardened operatives who fulfill the checklist for a team-based combat series – explosives, driver, sailor, Native American, general commando, etc. The wildcard is a female specialist who also serves as a doctor. The whole team makes for a dirty dozen.

Surprisingly, I enjoyed the hell out of this series debut. I typically like my team-combat titles to feature no more than five members. It's easier to keep up with and a quick read through the recruitment stages. However, this trio of authors really made the recruitment compelling, an asset made even more valuable by making them a bit more vulnerable than the stereotypical “invincible white hats”. The obligatory training and exercise segments was paired with a narrative that featured Barrabas on solo assignments scoring guns, bombs and transportation. Otherwise, 11 people training for combat could have been uninspiring.

When the mission begins, the authors never tap the brakes and provide for an explosive good time that served two distinct purposes – enjoyment and introducing a series villain in Karl Heiss.

If you love team-combat titles, S.O.B.s certainly seems like an easy choice. Based on this excellent debut, the series seems to possess the correct ratio of dialogue versus action. While this trio of authors will fragment, Robin Hardy takes over most of the series installments going forward. I hope to purchase and review more installments in the coming months. Stay tuned!