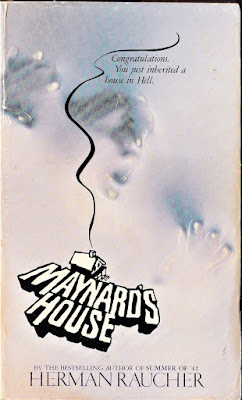 In 1980, literary author, playwright and screenwriter Herman Raucher made his only foray into the world of horror fiction with a haunting novel called Maynard’s House. The novel is highly-regarded among scary book enthusiasts and remains available today as a $13 paperback or an $8 ebook.

The year is 1973, and Cincinnati native Austin Fletcher, age 23, is done fighting in Vietnam and looking to make a fresh start in rural Maine. Before dying in the war, a friend named Maynard willed his house and all its belongings to Austin. As the novel opens, Austin travels by train to Northern Maine to arrive at his new house and 11 acres of snow-covered land. It’s a long journey that takes up the book’s opening 20%, but it allows the reader to better understand Austin and the character of the land where Maynard’s house sits. Raucher is a solid and humorous writer, so the reader is never bored despite not much happening during the opening chapters.

The house itself is a 100 year-old rustic cabin - sturdy and imposing - with no electricity and an outhouse in the back. This is no spooky Victorian mansion. It’s more like the cabin from The Hateful Eight or The Evil Dead. As the story unfolds, Austin begins to learn more about the troubled history of his new home. It seems to involve a New England witch several generations ago - back when that was a pressing societal concern. There’s also a local legend of elfin woodland beings called Minnawickies that ties nicely into a subplot involving a Native American teenage girl who Austin befriends.

The problem with Maynard’s House is that it never really gets frightening. The paperback has all the right ingredients for an excellent haunted house story, but the slow-burn buildup never really amounts to anything. Instead, we get to know Austin rather well and bear witness to his acclimating to the desolate winter surrounded by nature’s brutal forces. As a man vs. nature story, it held my interest just fine, but not much really happens until the ambiguous and confusing conclusion.

Raucher was a great literary writer, and his ability to draw a vivid setting was excellent. The novel never failed to hold my interest, but I kept waiting for it to become a traditional horror novel. Instead, it’s a journey of self-discovery for a troubled young man with his own disturbed thoughts and unreliable perceptions.

Critics love this book, and the reviews are universally glowing. I get it. There’s a lot to like about Maynard’s House, and I don’t want to steer you away from reading it. As a work of literary fiction, it largely succeeds. I was just looking for a scary novel, so the lack of a traditional horror plot mostly left me cold.