The Secret of Devil's Cave 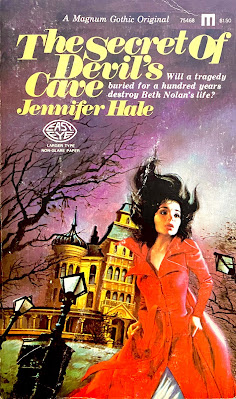 Frank E. Smith (1919-1984) had a number of career paths on the road to becoming a full-time novelist. He worked as a newspaper reporter for the Kansas City Star, was employed as a research analyst for the U.S. Pentagon and served in the Navy during WW2. By 1952, Smith began writing shorts for magazines like Mammoth Western and Manhunt mostly using the name Jonathan Craig. By the mid-1950s, Smith had found success with his police procedural series The Sixth Precinct. After using names like Carl Jacobi, Grant Colby and Elston Barrett, Smith adopted the name Jennifer Hale to cash in on the hot 1970s Gothic suspense genre. As Hale, Smith wrote five novels from 1971 through 1978 including The Secret of Devil's Cave. It was published by Magnum in 1973.

The book's protagonist is 20-year old Beth Nolan, a St. Louis resident who is coping with the recent loss of her father. After meeting with her father's attorney, Beth is astounded to learn that her inheritance includes a commercial cave and inn in the Missouri Ozarks. Her father never informed her that he owned any property outside of their residential home and antique store. This inheritance baffles Beth, warranting a visit to learn more about the property.

Upon Beth's arrival at Devil's Inn, she is introduced to the Bratchers, an eclectic family that has resided at the inn since Beth was three-years old. They run the inn and do guided tours of the accompanying Devil's Cave. Oddly, they convinced the town that they owned the entire establishment. So when Beth shows up to claim what is rightfully hers, the Bratchers become embarrassed and are forced to comply with her wishes. With this transition, Beth must decide if the Bratchers should stay and keep the business running or simply be replaced by new management due to the poor financial state it's in.

Here's the checklist of what Smith presents to Beth and readers that makes this the traditional Gothic 1970s paperback:

- Many years ago, the prior cave/inn owner's daughter died. In a unique rite of passage, the owner had her body laid in a glass casket and placed  on display in the cave. The town was outraged and threw the owner into the cave's endless pit deemed The Devil's Cistern.

- Years ago, a young girl was murdered in the cave and the killer was never found.

- Weeks ago, an inn resident seemingly vanished during a cave tour.

- Beth is warned by the town's wacky witch that she's already died years ago.

- Beth finds a bizarre life-like painting of herself in town with a date 20+ years ago.

- Beth finds a portrait of an unnamed gravestone in her father's possession.

- The cave and inn are apparently haunted by voices that can foreshadow death or danger.

There's a few other things tossed into the narrative like hidden Civil War treasure, a raven that keeps attacking Beth and the obligatory love interest between Beth and the wealthy town attorney. The bulk of the narrative dwells on the Bratchers and their odd behavior. There's a mentally unstable Bratcher named Flossie who Beth befriends and tries to protect. Of course power struggle is a constant with Earl Bratcher's knowledge and management of the business versus Beth's young inexperience as the conflict cornerstone. Villains are aplenty with Walt and Mark Bratcher both exhibiting murderous intentions and a potential risk to Beth.

The Secret of Devil's Cave resembles the book's mandatory cover – a young vulnerable female facing the inevitable danger. Whether it's supernatural or not helps to enhance the overall narrative. It's a sales pitch that always works wonders for this saturated genre. Is it a pillowcase over deceitful humanity or a genuine dreaded monster? Beth is an admirable character and there's a strong ensemble of characters that helps shore up any rough patches. Overall, this was an enjoyable experience and makes me want to read more of Smith's “Jennifer Hale” Gothics.