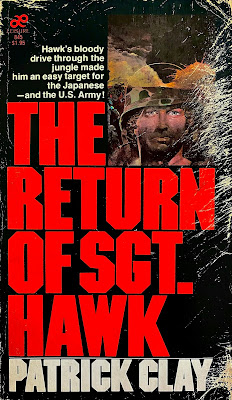 In 1979, Belmont issued the eponymous Sgt. Hawk, the first of four published novels authored by Patrick Clay featuring a gruff, tough-as-leather Marine Sergeant named James Hawk. Like Len Levinson's Rat Bastards, the series is set in WW2 on the chain of islands making up the bloody Pacific Theater. That campaign continues in 1980's Return of Sgt. Hawk, the series' second installment.

The novel begins as American Army and Naval forces are thrashing the Japanese occupied Philippine Islands. The assault is bureaucratically led by Kravanart, a bullheaded General who despises the U.S. Marine Corps. In an effort to assault the beach, Kravanart is persuaded to allow three companies, including Hawk, to hit the beachhead and engage the enemy. This heavy lift is welcomed by Hawk. Bloody, battered and shirtless, he scorches his Thompson extinguishing the bad guys while chomping on a plug of tobacco. After the assault, Hawk and the rest of the Marines are ordered to simply camp and wait while the Army and Navy clean up the mess and take the spoils.

In a small village, Hawk befriends a young American woman named Amelia and her cowardly fiance. The trouble begins when Hawk and company are left to “camp” for weeks on end simply waiting for Kravanart to allow them to fight. Eventually, tempers flare and Hawk storms a dense jungle hill, kills everything and stacks the bodies despite the orders to stand down. While the Marines are dishing out the damage, the village is captured by the Japanese forces and Amelia is taken. To complicate matters, Kravanart becomes angered with Hawk's defiance and orders an Army strike-force to search and kill the Marines.

Unlike the series debut, which combined a murder-mystery with gun-blazing action, Clay really branches out here and diversifies the narrative with a variety of subplots across multiple locations. The most interesting of these is a unique fantasy element that presents itself in what is otherwise a war-torn plot. Hawk learns that not only was Amelia captured, but that she was sold to a race of primitive men. In true Robert Howard fashion, Hawk breaks into a castle, fights enemies in a temple and even rescues Amelia from a dungeon filled with poisonous gas. There's really something for everyone – nautical adventure, military missions, shoot 'em ups, a heist, team-based combat and romance – through 225-pages of suspense and action.

I just can't say enough good things about this Sgt. Hawk series thus far. These first two installments are well-written, clever and fairly unique with a  central character who is just a tough son-of-a-bitch. His mannerisms, dialogue, finesse and firepower should appeal to fans of rough 'n rowdy action novels no matter if it's a World War or a range war. He's a lovable, violent white-hat hero clearly created by a fan of those genres. Track this one down as it is truly something special.