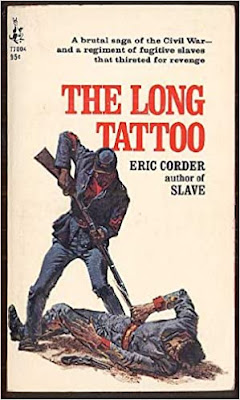 During the 1960s, Jerrold Mundis used the pseudonym of Eric Corder to write five historical fiction novels about the American slave trade and its aftermath. While the books have chronological continuity with a few recurring characters, the author told me they can be read in any order as stand-alone novels. The Long Tattoo is his 1968 paperback about a black regiment fighting in the American Civil War. It’s available today under the Mundis name.

Labe is a simple and good-hearted slave working as a blacksmith on the Crawford Plantation. One day, three men from the pro-slavery Confederate States of America visit the plantation asking Mr. Crawford to donate some blacks to help support the fight against the anti-slavery Yankees. Labe is volunteered for the job and the next daybreak, he’s off with the rebels.

The conscripted men meet up with others of their ilk and are marched up to South Carolina under the crack of whips to construct a Confederate fort. Rumors start spreading among the men that if they defect to the Yankee’s side, they’ll be set free from the bonds of slavery. It’s also in South Carolina that Rafe first encounters Bryerson’s Butchers, an Alabama unit of straight-up killers and psychopaths with no patience for Yankees or blacks.

Acts of cruelty and humiliation targeting slaves abound at the South Carolina fort. Meanwhile, word comes back from soldiers on the front line that the Union was not just freeing blacks but arming them and encouraging them to join the fight against the Confederates. As such, it’s no surprise when Labe slips away from his new masters and defects to the Federal side of the war.

Labe falls into a Company comprised of escaped slaves under the command of a light-skinned educated black from Massachusetts. The training sequences that transform Labe from an undisciplined slave into a soldier and marksman were fantastic. The narrative lens widens to give the reader a look at the tactical decisions being made as Union troops roll through the South.

It takes awhile to get there, but the combat scenes starring Labe’s unit are vivid and exciting. I would have liked more of them to emulate the brutality of an Edge western, but they were mostly satisfying - particularly as they lead to the reckoning between Labe’s guys and the terrifying Bryerson’s Butchers from earlier in the novel.

Overall, The Long Tattoo was a good - but not amazing - combat paperback. The evolution of Labe from slave to soldier was well-told and the fictionalization of Civil War battles seemed realistic enough. The paperback was more historical fiction than pulp fiction, but worth reading if the plot concept appeals to you.