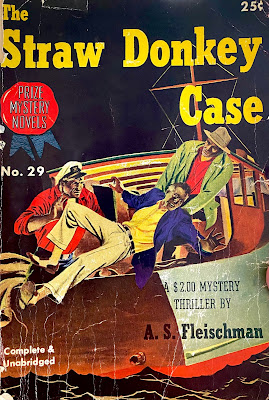 Beginning in 1948, author A.S. Fleischman developed the knack for writing. After a stint in the U.S. Navy, the author enjoyed a successful career authoring original crime-fiction paperbacks as well as children's fiction and even non-fiction books about stage magic. He graduated from San Diego State college, so it makes sense that his first published novel, The Straw Donkey Case, is set in San Diego. The book was published in 1948 by Phoenix Press as a digest-sized paperback originally sold for 25-cents.

A man named Mr. Ranson walks into Max Brindle's office looking for a good private-eye. Ranson explains that he is immensely wealthy and lives on a clifftop mansion with his niece and two nephews. Ranson “feels” that one of his family members is attempting to murder him to gain an early inheritance. After Brindle asks for evidence supporting his paranoia, Ranson produces no tangible proof and is asked to simply leave well enough alone. However, after Ranson pays Brindle a sizable sum of money to have dinner with his family, the private-eye's appetite increases.

After the uneventful dinner, Brindle proposes to Ranson to simply change the will to no financial distribution if he does dies by unnatural causes. Ranson agrees and shows up at Brindle's office the next day to declare that the will has been changed. The next day Ranson's body washes up on the beach as an apparent accidental fall from the cliffs. A few hours later, Ranson's well-endowed niece appears in Brindle's office wanting his services. She is inheriting millions but wants Brindle to prove that Ranson was murdered. If he was, she gets nothing. If it is an accident, the money is rightfully hers. Brindle tries to convince her to leave it as an accident and become a millionaire but this family proves to be a stubborn breed. Brindle takes this bizarre and abstract case.

By 1948, the crime-fiction paperback market started shifting to more mature stories for readers. The armchair sleuths and knit-quilting mysteries had slowly evolved into hard-hitting private-eye tales that displayed profanity, more sexual innuendo and an elevation in violence. The Straw Donkey Case isn't I, the Jury (Mike Hammer's debut), but it shares some of the same similarities. Brindle's secretary is in love with him and he's too busy to properly sex her up (or just doesn't want to). Like any good private-eye, Brindle is smart, but temperamental, and occasionally just walks into trouble before properly scouting the situation. He was far ahead of me on characters and motives but the narrative does move around a lot for readers. While the story isn't remarkable, it's a unique premise that expands into a compelling international thriller.

There's a reason why Fawcett Gold Medal was seducing Fleischman a few years later. Based on just this debut, it's easy to determine that the author was something special. Beginning in 1951, Fleischman would embark on a series of Fawcett paperbacks set in Asia's tropical locales. Most critics agree that these Far-East novels are the best of his career. However, The Straw Donkey Case is recommendable. To my knowledge there's no reprint of the book and that needs to change. Stark House and Cutting Edge...I'm talking to you.