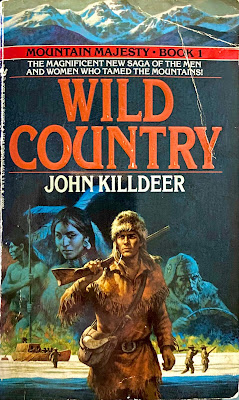 The 1990s proved to be a fruitful era for pioneer westerns. While the mid-to-late 1800s frontier was typically the backdrop for western storytelling, these early pioneer sagas were different. Instead of gunslinger showdowns, cattle rustlers and the U.S. Calvary dominating the western fiction, authors like James Reasoner, William W. Johnstone and David Robbins often placed their westerns in earlier time periods in locations west of the Mississippi River. Six-guns and repeating rifles were sacrificed for tomahawks and flintlocks that captured the essence of the true frontiersman.

One of these series titles was Mountain Majesty. The series lasted eight total installments and was published by Bantam between 1992 and 1995 under house name John Killdeer. According to my research, the first six novels were authored by science-fiction, western and fantasy author Ardath Mayhar and the last two by David Robbins. My introduction to Mayhar and the series is the debut novel titled Wild Country (with beautiful gatefold artwork by Tom Hall).

The book centers around two protagonists who are culturally different. One is Cleve Bennett, a young man who runs away from home after being whipped mercilessly by his abusive father. When his mother attempts to intervene, Bennett's father turns his rage on her. On the defense, Bennett ends up assaulting his father and makes a wise choice to just leave his family and head into the majestic Northwest Territories to learn trapping.

The second series character is a Cheyenne woman named Second Son. After besting most of the male warriors in physical combat, Second Son achieves a level of respect that makes her a “man” within the tribe. She spends most of the narrative hunting, trapping and eventually fighting with a despicable French trapper named Henri Lavallette.

These 1990s pioneer sagas typically showcase the same genre tropes, and this one is no different. Readers are thrust into the Cheyenne customs and traditions when young Bennett is incorporated into the tribe through various physical trials. It's the proverbial “fish out of water” element that captivates the central story-line. While there isn't a lot of action, the tribe does face the villainous trapper and consistently feuds with the Blackfoot tribe.

If you enjoy early entries in The Last Mountain Man, Sacketts (chronologically) and Wagons West then certainly you'll enjoy this as well. From a writing perspective, I think the delivery and plot could have used some spark to compete with the above mentioned titles. Otherwise, this is another solid 1990s pioneer western that's sure to please.