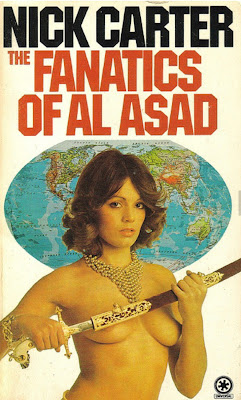 During his career, Boston native Saul Wernick (1921-1982) authored a handful of pulpy horror and action paperbacks, most notably Executioner #39: The New War, a transitional novel in the Mack Bolan series. Wernick also contributed five novels to the Nick Carter: Killmaster franchise, including a 1976 title, The Fanatics of Al Asad, the 104th book in the long-running series.

The paperback opens with an Arab terrorist strapped to a hospital bed being questioned by Nick Carter while being pumped full of truth serum. The President and Vice President have just been killed and the Speaker of the House is ascending to the presidency. This normal plan of secession is curtailed when the Speaker is kidnapped and held for ransom by a Palestinian terrorist group known as “Al Asad” (translation: “The Lion”). The terrorists want $100 million cash and arms reduction from Israel - who isn’t  excited about that idea - in exchange for his safe return.

The U.S. intelligence agencies need to neutralize Al Asad and rescue the Speaker - now technically the President - before the three-day deadline outlined in the ransom note. AXE’s best man Nick Carter receives the assignment, which is a good deal for us since he’s narrating the book. He’s assigned a partner from Israel’s intel service named Tamar, and she’s a super-hot babe (slim figure, full breasts) with an expertise in Islamist extremists.

With Tamar in tow, Nick jets off to the University of Kansas for a quick lesson on Islam and the Koran because AXE doesn’t have a 1976 World Book Encyclopedia. An informant explains that the leader of Al Asad is a Soviet-trained terrorist named Sharif who fancies himself as the King of all Muslims with all the accompanying wickedness that idea conjures. Bottom line: he must be stopped. Secondary bottom line: He’s probably in New York City.

The Fanatics of Al Asad reminded me of an episode of “24” complete with very specific time-stamps at the opening of each chapter. Despite the sense of urgency, there are time-outs for graphic 1970’s sex between Nick and the fair Tamar. At one point, Nick’s manhunt has him going undercover as a radical Muslim jihadi while cavalierly spouting off facts about Islam the author clearly gleaned from National Geographic. Mostly he spends the book’s first half skulking around Manhattan talking to informants without a ton of action.

This is the easiest book in the world to pick apart. Dig this: The President and Veep are killed by terrorists and the Speaker of the House (the new, unsworn President) is being held hostage, so the U.S. intelligence community assigns just one guy to handle it? Really? Meanwhile, the rest of America seems to be going about its normal business eating dinner in restaurants, having unabandoned sex, keeping calm, and carrying on? We’ve seen that it doesn’t take much to drive our nation to paralyzed hysteria, but the country is pretty chill because Nick Carter has this handled? I could go on, but I don’t want to spoil the stupidity leading to the book’s climax.

There’s a lot of dumb stuff in this book that you’ll need to forgive, and I just couldn’t do it. I wanted to like this book, but it just kept getting dumber and dumber as the pages flipped. Toward the end, there were some decent action set-pieces, but the reader needs to suspend disbelief beyond reason to get there. The Fanatics of Al Asad squanders an outstanding premise. Don’t waste your time. You deserve better.