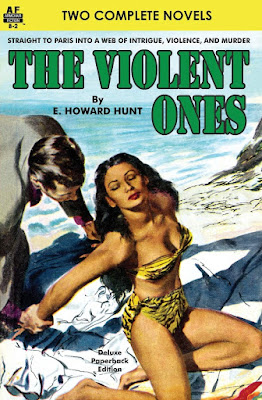 Howard Hunt was a CIA operative, political burglar and author. Using his own name or pseudonyms including Robert Dietrich, David St. John, Gordon Davis and P.S. Donoghue, Hunt wrote over 50 crime-noir and spy novels in the mid-20th Century. Several of these were on Fawcett Gold Medal including the author's seventh novel, The Violent Ones. It was originally published in 1950 and most recently reprinted by Cutting Edge and Armchair Fiction.

The novel stars Cameron, a rugged WW2 veteran who has recently been released from prison after paralyzing a man who was sleeping with Cameron's mendacious wife. The prison stint left Cameron with very little purpose and even less money. To solve both issues, Cameron travels to France to reunite with his old war buddy Thorne for a potential heist.

It's explained that during the war the allies dropped arms and gold to the Maquisards, a fierce underground band of French Resistance fighters. After the war was over and the Germans were gone, no one bothered to locate the whereabouts of these guns and riches. In 1945, the gold was cached by certain parties and left undetected. Now, five years later, Thorne finds himself in debt to a local gambling house and forced to make a daring venture to clear his account. Teaming with Cameron, the duo aim to move the gold to Switzerland undetected by authorities. After one night in the city, Cameron finds Thorne murdered. Who killed him? Who else is after the gold?

The upside is that Cameron is a great character, and I loved his backstory with the cheating wife and his two love interests in the novel. Both were just so sexy and Hunt expertly describes these encounters. The main problem, and there are many, is that Cameron isn't a formidable hero. He is routinely assaulted by the enemy and left to mend his wounds for another chance. He's just so average in terms of respectability but has the makings of a tough guy – war veteran, paralyzing his wife's lover, chick magnet. Further, I couldn't grasp the dense, overly contrived plot. Even Cameron seems confused with what's happening with the gold and just summarizes the confusion with a lackadaisical “I guess that makes sense?” statement.

My largest complaint is that Hunt uses this book as a way to boast of his knowledge of French locales and cuisine. Large parts of the book are in French – names, dialogue, food, wine, hotels, bars – and I found myself missing key moments of the story due to the language barrier. Hunt was a legit spy and his expertise in European affairs with the likes of Russian commisars, the Tireurs-et-Partisans, the FTP (?) and the Maquisards is impressive. I wanted a slick action-adventure novel with treasure seekers, paid assassins and beautiful women but Hunt failed to produce a compelling story among these unnecessary details.

Nevertheless, I'm happy I read the book, and I still have a lot of respect for Hunt's writing and the numerous novels he produced. However, they aren't all gems and The Violent Ones proves that.

Buy a copy of the paperback reprint HERE

Buy a copy of the ebook reprint HERE