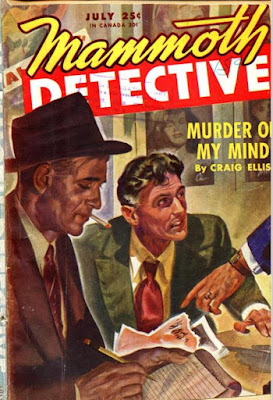 In 1950, Bruno Fischer became a success story with his bestselling novel House of Flesh. Prior to that, Fischer was concentrating on writing full-length mysteries while also contributing to the dime magazines and pulps. He authored hundreds of stories in the 1930s and 1940s for magazines like Dime Mystery, Dime Detective, and Black Mask. I recently located a July, 1946 issue of Mammoth Detective and was happy to find a Bruno Fischer story inside.

Fischer's "Cop with Wings" is a 5,600 word short story with illustrations by H.W. McCauley. In the story, Van Sheridan is the protagonist, a bold detective sergeant working in a crime-infested town. The city's town hall and most of the businesses and interworking are controlled by a savvy criminal named Peter Holland. Sheridan has butted heads with Holland before, but on this night it's over something unexpected.

Tonight, Van Sheridan and his girlfriend Emily are in Peter's house asking for his marriage blessing. Confused? Emily is Peter's daughter. Van Sheridan is forced to swallow his pride, accept a partial defeat, and ask his nemesis for a marriage blessing. Peter is outraged by the request and angrily advises Emily that she won't receive a penny of his fortune if she marries Van Sheridan. Further, Peter swears that he controls the city's police force and that Van Sheridan will be fired. After the heated argument, Emily asks Van Sheridan to leave the house and that she will discuss the affair with Peter alone.

This was such an effective story and Fischer's writing is top-notch. I found the character development as a smooth presentation that changed the roles significantly by the story's end. Fischer's ability to transform this simple "whodunit" into a riveting mystery is reliant on the key statement of "...other men." Just that simple piece of dialogue creates a completely different narrative. The reader is aligned with Emily, but then doubt and suspicion quickly sweep in to create emotional confusion. This is just brilliant writing and I loved the way it was presented. You can read this story for free HERE.