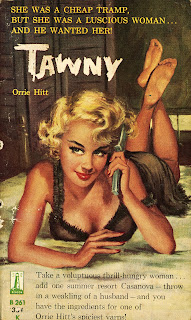 Orrie Hitt (1916-1975) was a suburban family man in upper New York who was quietly one of the most successful creators of sleaze paperbacks in the 1950s and 1960s. His plots were largely noir fiction with a heavy dash of non-graphic sexuality and bad decisions driven by greed and lust. During his life, he authored upwards of 150 novels before dying penniless. As a tribute to his life and literary work, Paperback Warrior offers an extensive look at author Orrie Hitt:

Hitt was born in Colchester, New York in 1916. When he was 11 years old, his father committed suicide. Hitt obtained a job at a hunting lodge in upstate New York to make ends meet while his mother worked as a hotel chambermaid. Meanwhile, Hitt was a high school student. As a sophomore, he advised his teacher that he wanted to be a writer, and his teacher did what all good teachers do – she shattered his dreams by telling him that he was never going to make it as a writer because his English language skills were unsatisfactory and that he was too much of a dreamer.

While working at the lodge, Hitt gained hunting and outdoors experience. Hitt sold his first articles about hunting as a high schooler to hobbyist magazines. When he became a senior, he and his former English teacher both submitted articles to an educational book company. Hitt's article about shooting was accepted, and his teacher’s submission was rejected. 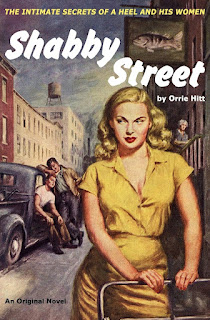 After Hitt's mother died, he became an orphan. Later, he joined the Army at age 24 and served in some capacity in WW2. After his military service, Hitt married Charlotte Tucker on Valentines Day, 1943, and together they eventually had four daughters. In the years following the war, Orrie worked as an insurance salesman, a radio disc jockey, a roofing and timing salesman, a frozen food salesman, and a handyman. He had about 16 jobs during that post-war period, and he wasn’t writing much because he needed the steady paycheck to feed his wife and growing family of daughters. During that period of time, he relocated to Iceland for a year to work at a hotel. This job afforded him a lot of downtime, so he used it to write his first novel, I'll Call Every Monday, published by Avon in 1953.

It’s clear that Hitt was a fan of James M. Cain, and a lot of his books were re-workings of Cain’s Double Indemnity and The Postman Always Rings Twice. The formula is that a drifter falls in love with a married woman. Together, they conspire to kill her heel of a husband so they can obtain the husband’s money. Of course, things go sideways, as they do anytime you fall for a murderous wife. That’s the template used by lots of writers in the 1950s, and Hitt went to that well many times in his own writing. 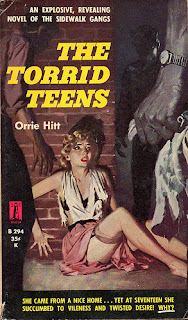 Hitt returned to upstate New York and became a full-time novelist. He set his manual Remington Royal typewriter up on the kitchen table and worked the entire day cranking out 90 words per minute. He lived on iced coffee and Winston cigarettes and he wrote book after book. He was a faithful husband and attentive father while all day, every day, he wrote about guys who were duplicitous heels who couldn’t keep it in their pants. In real life, Hitt was nothing like the characters he wrote about in his books.

Early in his career, Hitt developed relationships with “adults only” publishers like Beacon and Midwood who bought and published his books. Hitt found a good niche for himself as a writer of sexy fiction – often sexy crime fiction – but his publishers played up the sex and down the noir. Hitt was trying to make a living, so he kept writing the books he knew how to write and receiving advances of $250 to $1,000 per book for his paperbacks. His sleaze publishers gave him a lot of freedom to write what he wanted because they knew that they were just going to slap a silly sleaze cover on his books.

Between the years of 1953 and 1970, Hitt had about 150 original novels published under his own name and a variety of pseudonyms. There is a robust collector’s market for sleaze fiction, and his original paperbacks tend to get top dollar. The most affordable options are the reprint houses like Stark House Press, Prologue Press, and Automat Press.

Here's a "buyer's guide" on some of Hitt's novels:

If you want a James M. Cain style novel about the protagonist falling for a young woman married to an older rich guy where they plot to murder the husband:

Novels starring a young woman trying to survive by using her body to pay the bills:

Novels that expose the behind the scenes world of prostitutes and their tragic origin stories:

Hitt also wrote under several pseudonyms including Kay Adams, Joe Black, Charles Verne, and Nicky Weaver. Between 1953 and 1960, Orrie Hitt was producing about 20 books per year. His productivity slowed down gradually thereafter. By 1964, he was down to about four books a year, then three, then one. He essentially just ran out of ideas. The book contracts disappeared and his money ran out. A lifetime of working 12 hour days at his kitchen table drinking iced coffee and smoking cigarettes caught up with him. In 1979, he died in debt in a veteran’s hospital at age 59.