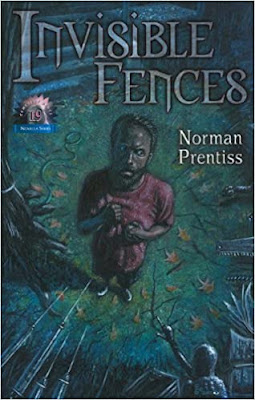 Norman Prentiss is a Maryland author that has appeared in Baltimore's City Paper, Writer Online, and Southern Poetry Review. He won a Bram Stoker award in 2009 for his short story "In the Porches of My Ears". His work includes The Fleshless Man, Four Legs in the Morning and The Narrator. His novel, Invisible Fences, won a Stoker Award in 2010 for Superior Achievement in Long Fiction.  The story was published by Cemetery Dance and is available in both physical and digital versions.

Invisible Fences begins in the post-hippie 1970s and features a young boy named Nathan and his slightly older sister Pam. Their mother suffers from agoraphobia, the fear of the outside. Her sickness leaves a deep etching in Nathan and Pam's growth. The idea of an "invisible fence" is created by their father through the use of scary stories or horrifying events that securely keep the family from exposure to the horrors of the outdoors.

As the narrative advances through the years, it's an emotional roller coaster through Nathan's childhood and eventually the transition into adulthood. As a man, Nathan is now experiencing a hefty emotional weight related to something from his past. He also is burdened with taking care of his parents, which leads to some recollections of his early childhood and the things that happened.

For the most part, Invisible Fences is revealed to readers through a murky, broken looking glass. That is the main reason this 150-page novel works so well. It requires some imagination from the reader while also forcing them to arrive at their own conclusions. Was there something evil outside? Did Nathan and Pam's parents protect them for a reason? Or, was it all a cautionary tale from challenged parents? Prentiss asks these questions in a subtle and clever way. The book's emphasis on growing and evolving is important. Invisible Fences forces us all to face dark truths.

As a short novel, Invisible Fences is extraordinary. If you love dark, emotional rides that span a lifetime, then Norman Prentiss will amaze you with his storytelling gift. This was a non-stop page turner. Highly recommended.